i've been working on the cylinder drains and the cylinder oiler mounting.
the lower drains can be operated from the cab on each side like the Wabeno Phoenix.
the mechanical steam oilers i'm using are from American model engineering.
they are used on grand scale(15" tracks) locomotives.
http://www.americanmodeleng.com/id16.html

the first pic shows the drains and oiler mounting, it's actuated from the valve operating arm.

today i mounted the tracks.
starting to look more like a Phoenix
now to wait for the cabinet maker to build the cab.
i'm also waiting for warm weather so i can open the door and finish painting.

Hi Marv in Minn, that is an absolute work of art, I've been following your build great work will be watching when you get it out for trail runs.
GB in MN
E

Marv: In photo #3 above , is that a boiler drain pipe / valve sticking out above the rear of the track?
If so , might want to reengineer that a bit. Would be a shame to have something come up with the track and take that out suddenly.

It's definitely a work of beauty in engineering:salute:
P

In photo #3 above , is that a boiler drain pipe / valve sticking out above the rear of the track. If so , might want to reengineer that a bit.
Click to expand...

I dont think it would be too objectionable, to use a 90 degree globe with the handle up and outlet down. Even though the pressure side would be on the handle packing side. I have a factory setup like that and when I asked I was told no bid deal. While still near the track, that would be right against the boiler and more practical than moving a hole in pressure vessel.
L

Marv, Thats an awesome job your doing !! lot of work ,those early phoenix,lombard steamers are pretty complicated ,compared to Lombards later 1908 style machines!! heres a picture of me steering a later Lombard steamer a few years ago, a machine i helped restore. Don

is that Harry Crookers Lombard ?
L

Peter said:
I dont think it would be too objectionable, to use a 90 degree globe with the handle up and outlet down. Even though the pressure side would be on the handle packing side. I have a factory setup like that and when I asked I was told no bid deal. While still near the track, that would be right against the boiler and more practical than moving a hole in pressure vessel.
Click to expand...

Although the angle in this photo does not show it there is six inches between the track and the valve. This detail became and extensive conversation during the design process. I was Marvin's, and my determination that there was ample room with it's present location. Marv will be adding a lockable handle to the ball valve to prevent errant opening.

LundMachineWorks said:
Although the angle in this photo does not show it there is six inches between the track and the valve. This detail became and extensive conversation during the design process. I was Marvin's, and my determination that there was ample room with it's present location. Marv will be adding a lockable handle to the ball valve to prevent errant opening.
Click to expand...

pic attached showing the clearance.
the valve will also be protected by the oak cab floor.
the elbow will also have a solid plug in it while running.

On my engine, my 1" blow down valve has a "plug". It is comprised of a cap and a close heavy nipple. The cap was tac welded to the nipple after tightening for it always to remain as one. On the other end of the nipple, a 1/8" cross hole is driven a couple threads from the end.

In operation, the plug has pipe sealant applied and is only snugged in place. When ready for a blow down, the plug is slowly removed. Any pressure leakage of the valve will be relieved by the 1/8" hole, keeping you from experiencing a surprise poof of steam.

Has served me well, preventing a curious hand from opening the valve and having an accident.

That photo show the clearance in much better detail Marv.

Just would hate to see an accidental dislodge of that under pressure.

Wasn't doubting your engineering work, the first photo looked to be much closer to the track.
Ed
3

Hi Marv; As Pete said, a "weep hole" may save you from a nasty surprise if your valve weeps a bit. If you don't want to go the nipple and cap route, a small hole drilled through a pipe plug works just as well. Clamp the square head in a vise and drill a hole through it coming out the center of the square head. Any pressure will weep off before it can build up, and if the valve is opened by accident the flow will be greatly reduced. If you find the "weep hole" plugged, you could carefully stay off to the side and run a poker through it, then when it's off drill it out to a larger size so it won't plug up again. Cracking the valve may blow it out , too; be careful if you do that to not blow it out of the valve as it should be snug but not real tight. You want to be able to get the plug out of the valve without loosening the valve. Hope this helps, :wave: keep up the wonderful work. 3/4 A
J

Marv. It looks like the Phoenix and I think a shay has no governor. Can you elaborate?

spent the day making a throttle arm similar to the original one.
the big difference is that the original throttle valve is in the steam dome
and the 1/2 scale 1" ball valve throttle is in the cab where it is serviceable.

the steam from the steam dome comes out the right side to the 1" main shut off ,
then from the throttle the pipe goes back thru the boiler to the smoke box
where it Tee's to the engines.

the back of the boiler gets real busy when you put full size components on a 1/2 size boiler.

John T Hall said:
Marv. It looks like the Phoenix and I think a shay has no governor. Can you elaborate?
Click to expand...

the Phoenix did not have governors, they depended on the engineer to maintain speed on the ice roads. they were never used as stationary power, only pulling.

In regards to governors...interestingly Lombard's second design (the version later licensed to Phoenix) used a governor.

In fact one of the first articles that appeared stated how they could pull the throttle "and just let her go.."

In the photo below you can see the governor just in front of the steam dome. 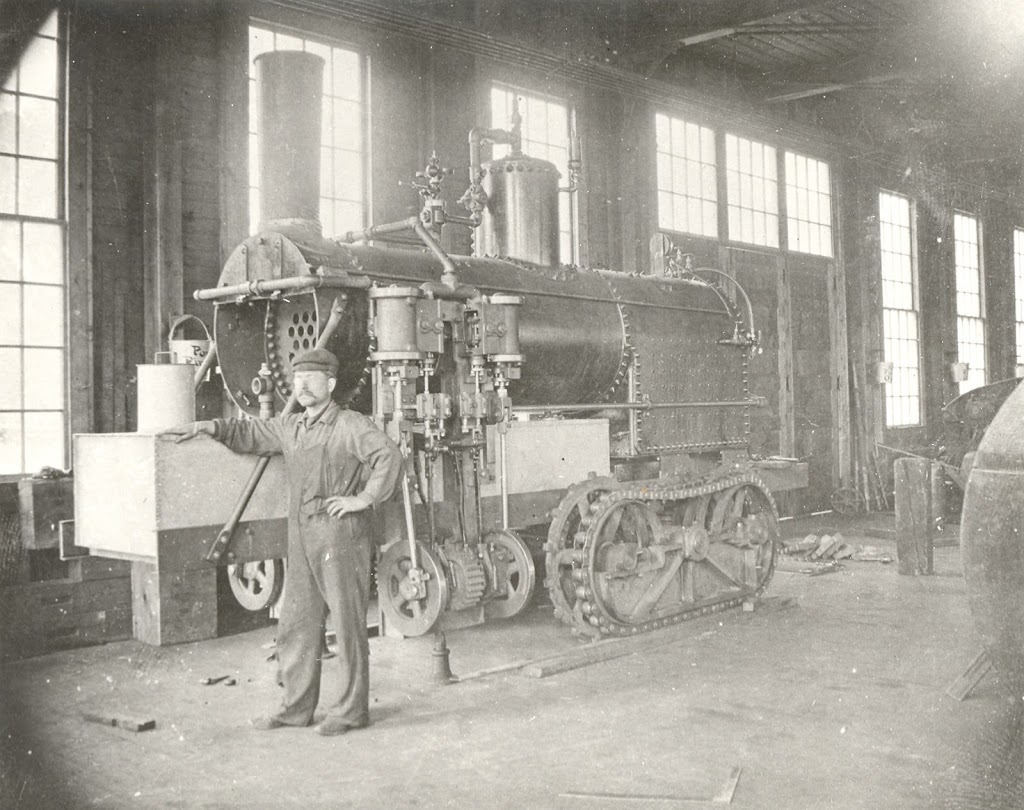 The governor does not appear on any of the later Lombard built machines.

tharper said:
Hello Marv,
(clip)
The governor does not appear on any of the later Lombard built machines.
Best regards,

Wonderful pic!!!
none of the pics i have seen of operating Phoenix have the design shown in the pic nor do any existing machines.
i see many changes in the pic besides the governor and external piping. steam chests turned, cast spoked flywheels, and a very short smoke box.
To me the pic looks like it might be a prototype design. the external governor and piping would not be as good at -20/30 deg in the winter.
thanks for the pic, marv
Last edited: Apr 4, 2014
P

I hit the thanks button. But it is not enough. I have to say that is very interesting bit of history you just posted. I did know the history of the design. I still dont understand the why.

I love that early log hauler, with the two cylinders setup like a locomotive. Very Elegant. Why they made those changes, seems both clumsy and much extra mechanics (cylinders, gears and more gears) for the same end result.

I got quite a few photos when I last visited Clarks. What an experience that must be to operate.

This is an absolutely wonderful scale build. Another understatement of the obvious, I suppose.
T

Lombard's first machine "Mary Anne" (1900) had a few design issues that he rectified on later machines.

For instance, "Mary Anne" used two horizontal cylinders located between the frames and providing direct drive to a cranked axle shaft. She also used cog wheels (much like the cog belt on a motor) as opposed to sprockets. During trials they had problems with snow and ice packing the cogs and the lags coming off. Lombard fixed this issue by substituting toothed sprockets engaging through slots in the lags as is common practice today. They also realized that without a differential "Mary Anne" was rather un-wieldy. All of this came to light during a Canadian patent equity suit against Alexander Dunbar & Sons of Woodstock, NB.

Lombards "revised" design is represented by a series of three revised machines built for Lawrence, Newhall & Page. (1900-02)
I believe the previous photo may have been one of these machines. As shown these machines used the upright cylinders and sprockets.

Later of course, Lombard refined the design by the time of his 1905 patent he had developing a differential (compensator gear - as Lombard referred too it) and used two horizontal cylinders placed outside the frames driving a jack shaft. In addition, the water tank was now a locomotive style saddle tank. This design is what we refer too as the definitive standard 20 ton steam Lombard as built through 1917.

Interesting the 1905 patent uses steel bogies as opposed to Lombard's roller chain arrangement. As noted in the previous referred to patent suit (Lombard v. Alexander Dunbar) Lombard stated that the bogies kept breaking so they abandoned the design and went back to the roller chains in a highly refined form.

Interestingly it was one of the few Lombards built to the 1905 patent that was at the center of the equity suit against Holt. This particular machine was purchased by the Western Lumber Co. of Lathrop, MT. on Oct. 25, 1905.

In regards to Phoenix. The list I have shows that Phoenix acquired a Lombard on May 16, 1904 and another on Nov. 3, 1905. Of note is that C. L. Tolles, President of the Phoenix Manufacturing Co., provided testimony on Lombard and Bests behalf. 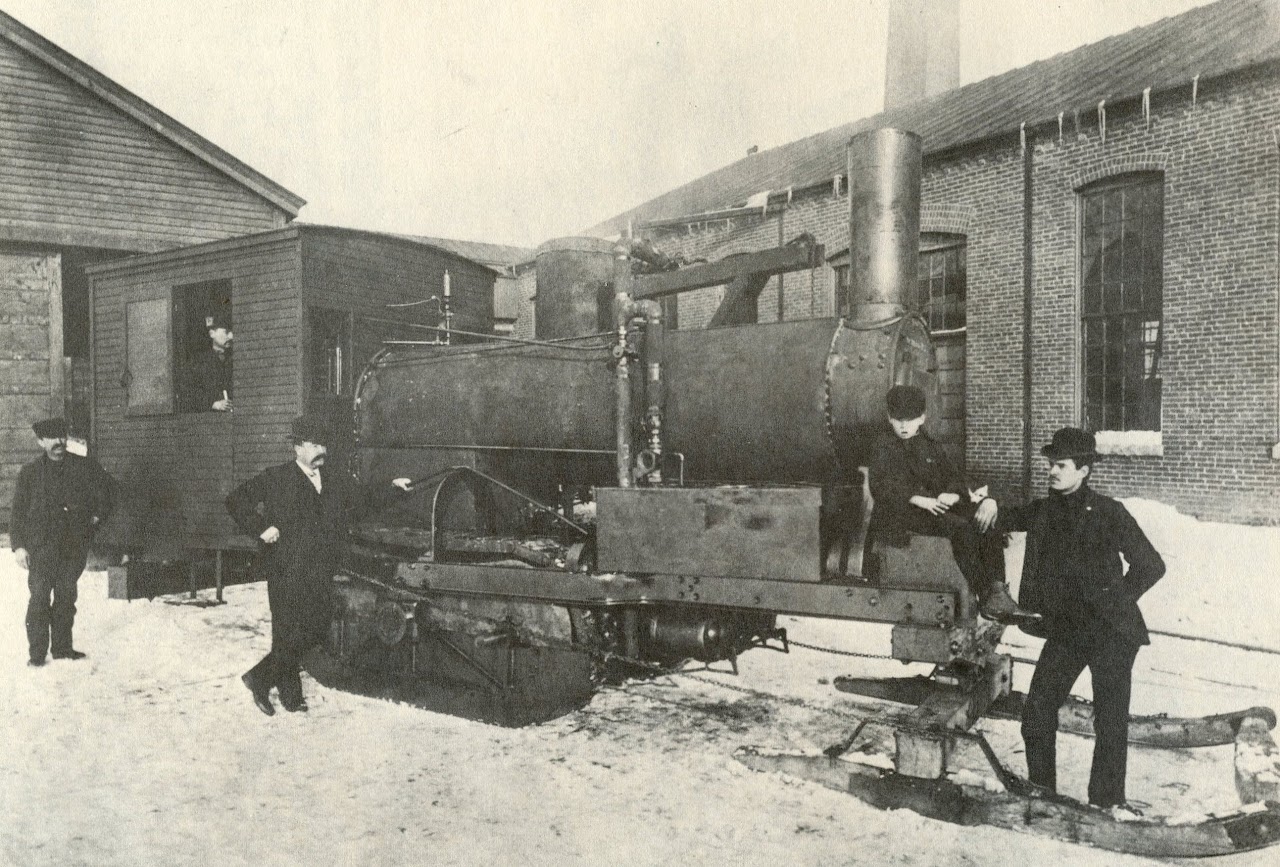 And a close-up of the 1905 design. (This is the Lathrop, MT. Lombard.) note the outside chain drive. 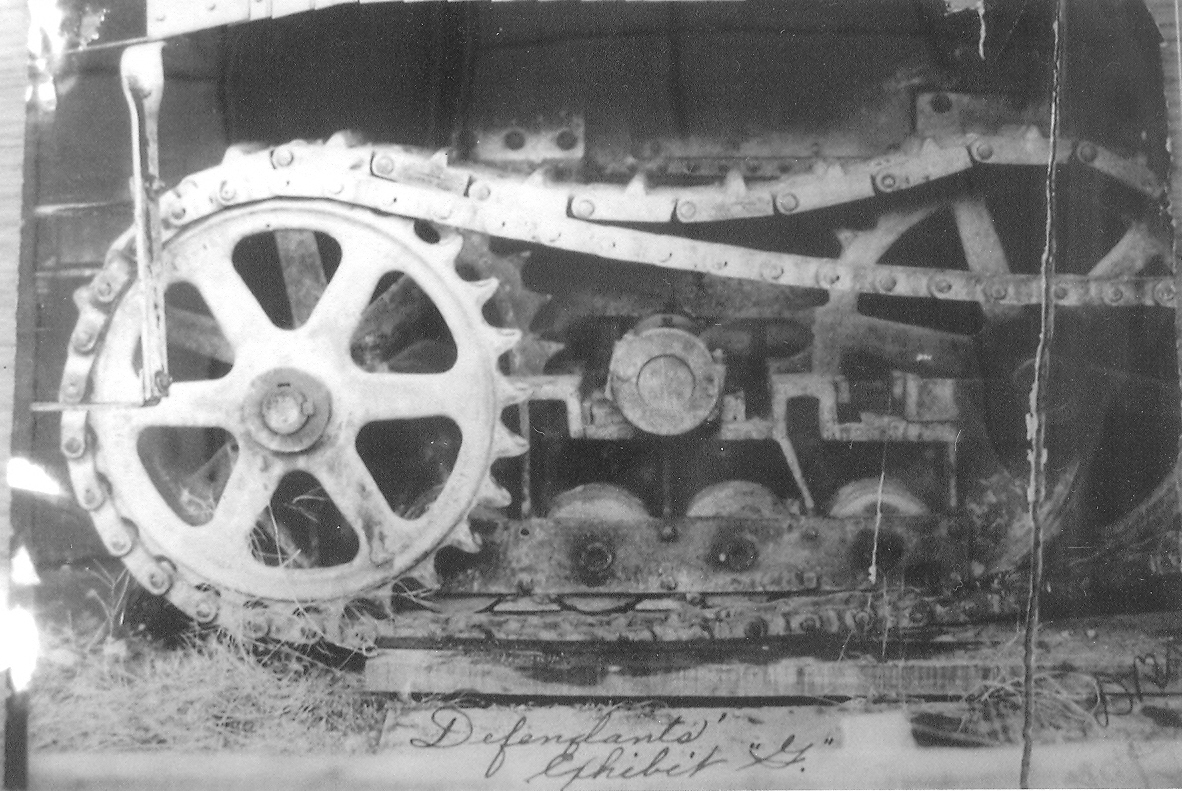 For comparison a standard 20 ton Lombard 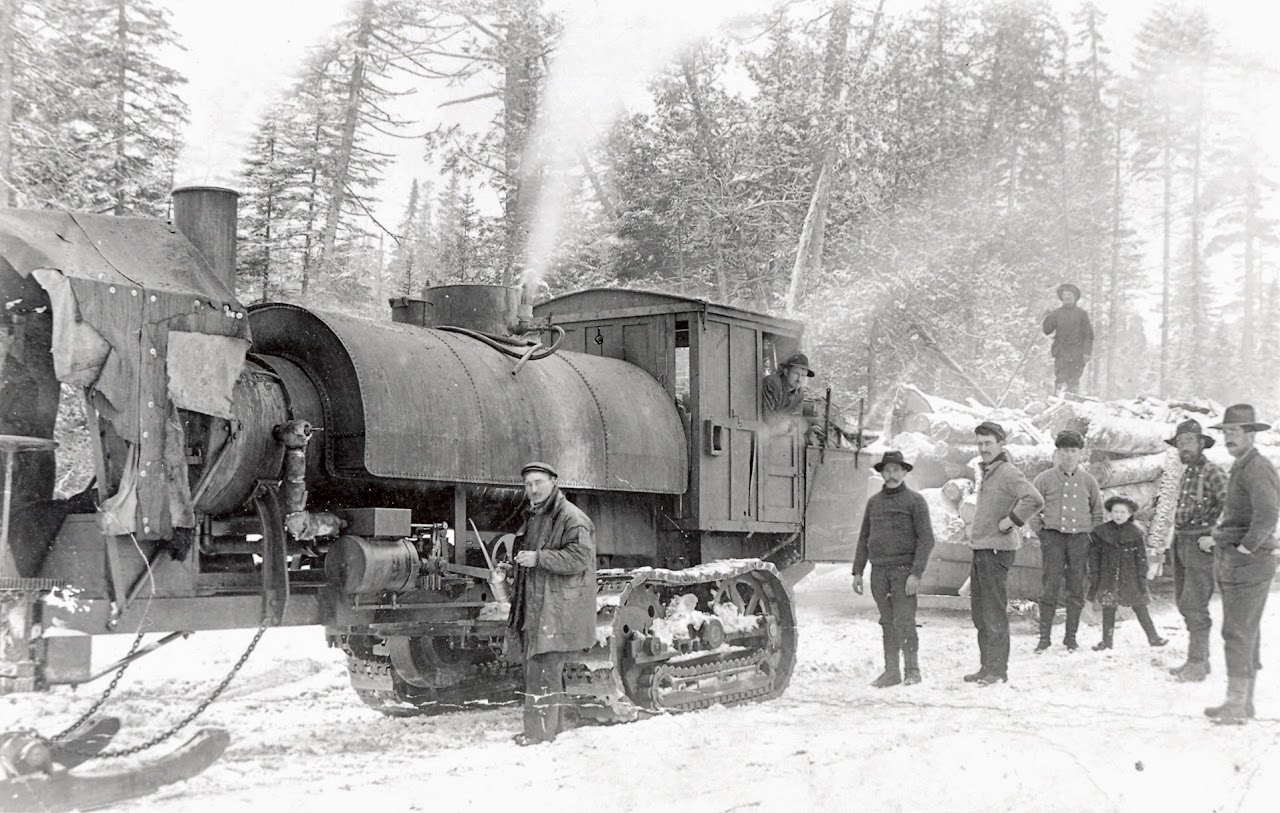 To add to the confusion Lombard also produced a smaller log hauler with a vertical boiler and narrow lags. This are often mistaken as "early" or "the first" Lombard when in reality they were produced concurrent to the 20 ton machines and were an attempt to produce a lighter, cheaper log hauler in an effort to increase Lombard's market.