Hello all
Most probably know by now we acquired a 1963 Austin Freeway from up in the hills around Killarney. It was actually on top of an old coal mine.
We called the Austin Pat because his original number plate was PAT-801.
Anyways Pat had not moved from under the carport since 1987 so he was a bit dirty. Nobody had even opened a door since 2010 (I know that because the daughter wrote it in the dust on the windows). Mice had found their way in so some of the interior was turned into rat poo.
Overall his body has a couple of fairly minor dints but there's no cancer rust anywhere, how unusual for an Austin. Plenty of surface rust but that's patina isn't it?
Pat had a couple of minor engine issues such as no spark, seized accelerator plunger in the carbi, rotten hoses, wonky choke on the carbi (put together wrong so carbi was stripped, cleaned and reassembled). Just have to put the cleaned out fuel tank back in, refit the electric fuel pump and put new fuel hoses on. Oh, need a fuel filter. There has never been one by the looks. And that should do the engine until Pat's able to be driven.
I gave Pat had a pretty good run today just so I could see if the temperature gauge works. It does.
All the wheels are off so tyres can be replaced so Pat is sitting on a couple of car stands and a couple of Besser blocks. He got up to 40m/hr sitting on the blocks today. I had to hold my hat on for sure.
The clutch seems OK. The brakes stick so some work needed.
Also gave Pat a sweep with the broom and gave him tubin' today because it wasn't so cold. I think the grass had a top dressing with all the dirt that came off.
Mitsi the puss likes Pat. She can sleep in the sun out of the wind. She's going to get a shock soon. I'll wind the windows up after the rat stink goes.

I should do some quotes as there is some really good information about the Freeways in another thread. Some fantastic information and pictures to tell the truth..

I think that'll do for now
Cheers Scott

I look forward to seeing you get this one going. Will be a good project as it's a good sound car. Keep us up to date. Always like to see something saved. doesn't have to be 100 years old to be worth saving.
I

Scott, you may like to have this little bit of history of the Austin Freeway posted in the other thread.

Nice one, hasn’t been out from under the carport since 1987?? That’s when I was born

I think Mitsi likes Pat because Pat smells like meeces.....

So Pat has some PATina. HE looks great and with some minor servicing work he will be running around the streets on club plates in no time. At least no one wil reckognise you at first and make sure you chain him down so your friendly local thieving scrappy doesn't think he needs it more than you.

I like the little tail fins! Neat looking car!
S

Hello all
Some more before pictures and after a tubbin' (that's a wash Glenn).
I shouldn't have done the tubbin'. Both headlight surrounds fell off. Riveted gunk metal had corroded from the metal clips.
The white on the rear door armrest is spider poo. Everything lived in Pat.
In the last picture you can see just how oxidised the paint is. It washed off.
It's such a shame about the 2 bigger dints. But you get that. Bloody cows.
For those who didn't notice, no seat belts and no external mirrors. I have the old Akubra ready. That old farts coming. As Shultzy says, I see nothing!!

Bloody Mitsi's into everything, especially if it means laying in the sun. 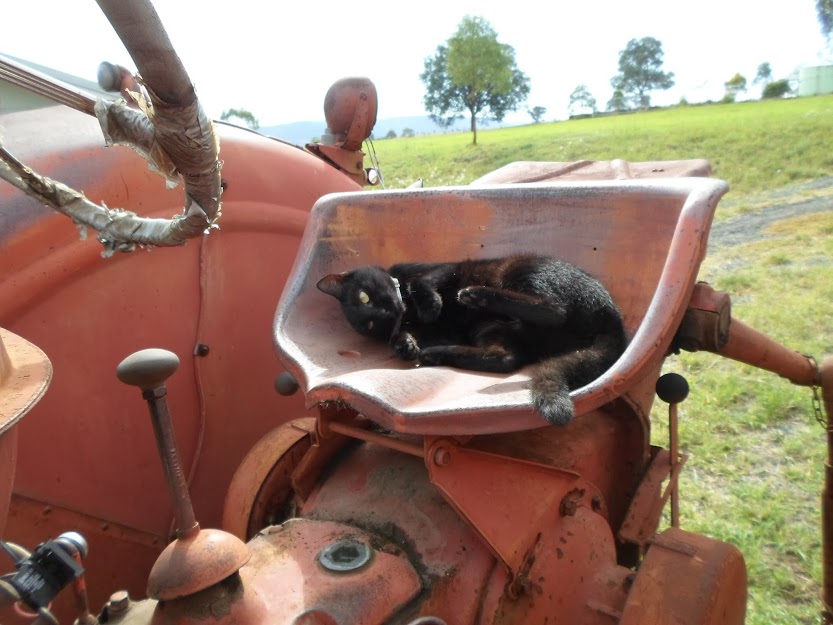 isandian said:
Scott, you may like to have this little bit of history of the Austin Freeway posted in the other thread.
Click to expand...

Here is a link to explain to others the ADO40 mentioned in your PDF and a brief summary of the Freeway Isandian.
https://en.wikipedia.org/wiki/Austin_Freeway

With the prototype, was it imported with the 6 cylinder engine? With the grill in the pictures it would be hard to imagine the 6 cylinder in there.
For those who are interested, they moved the radiator to the front of the radiator support to enable the longer engine to fit in. With the 4 cylinder model made in England, the radiator is to the rear of the support panel.

Hey Scotty
Was just reading the tale of Pat to the misses and she said why doesn't he try the old trick of a open tin of shoe polish inside the car in the sun to take the smell out.
Cheers Dobbo

Definitely looks like MG tail lights.
Hey Scotty, under the bonnet on the firwall on the passengers side is that an MSD elctronic ingintion system?
Pat certainly looks better after a bath.
A

Hello all
Mr Dobbo: I didn't know about boot polish. I went down the Nana path, mothballs.
Cobba: As Jarrod said, part 2 of the wireless. That will be handy knowing Jarrod has one if this one doesn't work. Might be able to get specifics (ie values) out of it if I can't get this one working.
So yesterday was a farm work day but I did find a few things out. The rats/mice must have thought the parcel tray under the dash was a walk through eatery. Nearly every bit of wire or hose (like washer hoses) are eaten off at the firewall. Not much of a drama but will take some time to fix. About the only thing they didn't eat was the wires going to the coil, starter and generator warning. Lights, wipers, wireless.....all snipped off.
Also found pinhole in the radiator and heater hoses are buggered. I want to take the radiator out to give it a clean and closer looking at. While out I'll see if there's a thermostat there. I noticed a home made thermostat housing/top radiator hose dodad so I have my doubts. Now there's a work of art, the top radiator hose. I'll have to remember to take a picture of one. It would send the parts people are Supercheap and Repco bonkers trying to figure out what it was off.
Also found out Pat has at least one optional extra. Normally you have to work the heater tap manually from under the bonnet. Pat has an optional cable so you can turn the heater tap on and off from in the cab. What luxury.

With all the rodents that lived inside, I cannot figure out there isn't more rust. Under the back seat (big nest) is pretty clean. The worst is where they had a nest under the bonnet. I'll see if I remember to take some pictures after the nest was taken out. I filled up a 120l wheely bin with the mess the rodents made.
A day in town today so not much will happen at the farm (That's where Pat is).

As a side note: I bought a manual off evilbay the other day and paid for express shipping. I got told yesterday express now means 12-19 days from Victoria to here because of Covid. Not happy Jan.

Scotty 2 said:
Hello all
Some more before pictures and after a tubbin' (that's a wash Glenn).
I shouldn't have done the tubbin'. Both headlight surrounds fell off. Riveted gunk metal had corroded from the metal clips.
The white on the rear door armrest is spider poo. Everything lived in Pat.
In the last picture you can see just how oxidised the paint is. It washed off.
It's such a shame about the 2 bigger dints. But you get that. Bloody cows.
For those who didn't notice, no seat belts and no external mirrors. I have the old Akubra ready. That old farts coming. As Shultzy says, I see nothing!!

Jeeesh ... the steerin wheelo is on the wrong side of this Arvo !

That may just be the reason the 'wireless' does not talk, the 'rattus' ate the wires that powered it. You may end up with a concertina style top radiator hose which are still available. Good old 'moth balls' there must be a lot of male moths about in pain. Naphthalene is another one of Grandmas cure alls.
S

Hello all
A day intown today but managed to fill the back of the ute and the little trailer up with stuff. Freestyle picking. Back for another load next week

Anyways, some more pictures.
I thought these Freeway bodies were built in Australia. More then likely WRONG. There's a badge from Pressed Steel Co in Cowley, Oxford. I'd hazard a guess to say that that place is in Pommyland. Bodies made in England or body parts pressed there and send here to be welded together?
Funny thing is the Pressed Steel Co had American interests. Huh, who would have figured?

Under the rear seat. No rust.

Boot, no rust. Even the fuel pipe is clean as.

Bottom of the radiator support panel. Not a sign of rust

top radiator hose with fancy T which goes to the heater.

Good stuff Scotty, it is very clean once you get the free-loaders out of the Freeway. Your hose may not be such a tricky bugga to get. Im thinking Mini or similar had something like that. If not a bit of exhaust tube and braze in the small tube and use some short pieces of hose for the reat.
You must log in or register to reply here.
Share:
Facebook Twitter Reddit Pinterest Tumblr WhatsApp Email Link
Top