Blacksmith Shops of the Past

First series will mostly be old California shops taken off Calisphere. Calisphere is the greater digitized California university photograph collection(s). All in one place! I’m not stuck on CA, though.
Then I will branch out to pictures available online. Please feel free to add any old blacksmith pictures along with a description of you have one. I really like the local history that goes with a photo if you have it.

Again, Calisphere.
I’ll post a few individual pieces of equipment that I think are interesting.

I grew up near some of these places.

Although not necessarily old, here are a couple of pages of European blacksmithing stuff. Some of the shops shown here are well over 100 years old.

Dang!
I want to hang out at the sickle factory!
Awesome! 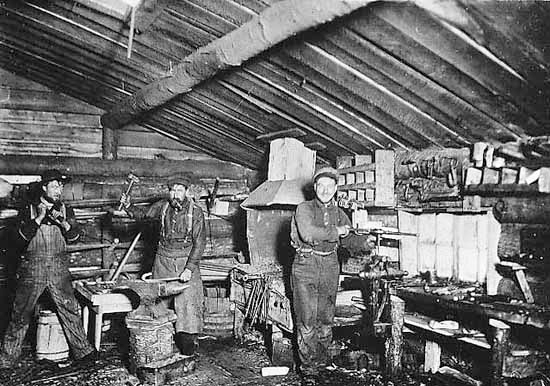 Yes. The "New" sickle factory is on dry land and dates from the late 1800's IIRC.
The "Old sickle factory goes back to the 1600's. It is water powered and has "departments" on both sides of the mountain stream from which it draws power. There's even a leaky-roof walkway between the two that, of course, goes over the stream.

If I’ve already posted these pictures I apologize. Calisphere is my friend.

Sorry about any doubles. These are mostly off the internet with a “vintage blacksmith shop” google search.

There appears to be a trend in these old Blacksmith shops as to equipment:
1) Most common thing would be an anvil or anvils.
2) A forge with a chimney made of brick or metal.
3) Hand tools, hammers and tongs, etc.
4) Hardy tools for anvils.
5) Blacksmith’s apron.
6) Bolt rack.
7) Iron cone up to 4-5’ tall.
8) Swage block or blocks
9) Various racks and hooks for hanging horse shoes, plows, carriage wheels, etc.
10) “Stretcher” for making wagon tires out of bar stock.
11) Vise or vises. Many pictured are post vises. An occasional step vise.

What else am I missing?
Just the three antique items—swage block, cast iron cone and wheel stretcher can set you back $2000.
Hardy hole tools get expensive, quickly.

If you're figuring what you need, if you put power hammer in the price you can get rid of three-fourths of the other things, since you can make them with the hammer. I've never bought a hardy tool in my life, and I don't forge with an anvil. My anvil's a sawmaker's anvil, and they're comparably cheap. I don't own a cone or a swage block. Just saying. Of course, you're not gonna be like me and will need your own things.

I love your pictures of old shops. Keep them coming!

Joel, I own a Little Giant hammer and a Schuler hammer. Where do I go to see how to use them as you suggested? Or to use them correctly at all?
The swage block and the tall cone are so evocative of old blacksmithing that the image they convey has become necessary to me. I will continue to search for the right deal.
Thank you for your nice comments!

Hmmmm. Quadstate is the mecca of blacksmiths, but that's in Ohio, and you're in California, right? That'd be a haul. There's a new blacksmith school in Lewiston, Montana you might look into. I taught a class there last May on die making. Al Lake, the owner, is a super nice fellow. He has over a dozen power hammers (many on his line shaft) so every student can run one. He has several cabins for people to stay in while they're there. Here's a link to his site for the cabins. I couldn't find one for his blacksmithing school, but you could give him a call to see what his schedule is for the year.

Since your thread is about pictures of blacksmith shops, I'll show a few of Al's place. (I don't mean to get off topic of old shops, but they do pertain to your question.) The first one shows hammers that're not on the line and is where the students mostly work. That's a 250 pound Little Giant at the left rear, a 100# Jenkins to the right of that, a black 100 pound Beaudry in the middle (or is it a 200 pounder?), a 100 pound Little Giant to the right of that and two hammers I don't recall in the right rear. The second picture shows hammers under his line shaft. The third picture shows a Central Machine hammer to the right, a Dupont in the middle rear, and a charming little 50# Beaudry to the left. The last picture is of a No. 1 Champion. He has another building with hammers too, where he's returning them to working order; but these pictures show the students' area.

I hope this has been relevant to your topic.

Monsonmotors said:
Joel, I own a Little Giant hammer and a Schuler hammer. Where do I go to see how to use them as you suggested? Or to use them correctly at all?
The swage block and the tall cone are so evocative of old blacksmithing that the image they convey has become necessary to me. I will continue to search for the right deal.
Thank you for your nice comments!
Click to expand...

I don't know why I didn't think of it earlier, but one of the books that was very influential to me was the Blacksmith's Manual Illustrated, by J.W. Lillico. It first was published in 1930 and has been reprinted since. I have the 1991 edition printed by Grosvenor Press. (ISBN 1 869964 21 7) It has many illustrations which show general processes for making parts with a power hammer, which are quite different than the approaching to making them by anvil forging. This book will really get you to thinking.
R

This photo is my wife's Great Grandfather in his blacksmith shop in Norway. He's the big ol' guy. . .
My wife got interested in blacksmithing a couple years ago, partly as an outlet for anger issues after a traumatic event. A cousin of hers saw it on Facebook and sent her this picture. She hadn't been aware that blacksmithing was a family tradition before that. Sorry about the poor pic, the glass it's mounted in reflected the light. . .

Don’t want to mess with that guy!

Joel, looks like I may be YouTubing my education for awhile! Is there a YouTube Power hammer tutorial you like? Also, how do I know if my hammers are in safe, usable condition? Both are historic with provenance (if you can use term that for a hammer) coming from local blacksmith shops. I sure don’t want to hurt me or the hammer.
One experienced man told me to only hammer red-hot metal or I would hurt the hammer?
I’m going to send away for all the manuals you mentioned. I’ve got a steep learning curve ahead of me.