G'day, I am in need of some advise please.
Is there a formula for the flat pully width to suit flat belt width? i.e. 4" belt 4" pulley.( Formulas confuse me =2xb(2)=4)
I get that the wider the belt the better the grip.
My 3.5 hp Emu engine provides limited torque and I am still looking at what to drive. A saw is too dangerous, a sandstone sharpening wheel or a water pump much safer. a chaff cutter might solve my wood chipper problems. lol

Hello all
Personally I'm not too fussy. If it stays on, it stays on.
I try to fill the pulley (ie 4" pulley gets a 4" belt) but if the pulley is 4" and a 3" belt is there ready, willing and able then it goes on.
We rarely run flat belts for use at home (for the job they're meant to do) and at shows you can't really load things up so belt width/slip isn't really a problem. The problem I encounter at a rally is getting belt tension if the engine and appliance are on 2 different trolleys.
A tensioned 4" belt has a lot of grip and will drive a fair lump of a load.

Allenf, Joel Sanderson in the blacksmith forum is very knowledgeable about what you ask. He has it all in his head, no references needed! Ask him and see what he says.
C

It seems at rallies star picks get used a bit to anchor engines and pumps apart. why not make a light weight adjustable frame to put between the two?
S

cobbadog said:
It seems at rallies star picks get used a bit to anchor engines and pumps apart. why not make a light weight adjustable frame to put between the two?
Click to expand...

Sounds easy doesn't it but belting 2 things together that aren't bolted down at a rally is kinda hard. Frames sounds good but take room and still take a lot of setting up. Things can still move even if it's head over tit.
I can see a time when star pickets and the like will be banned due to safety concerns, especially NHMA events.

If you have enough tension on the belt the engine and appliance that are pegged to the ground something will give. I've seen pumps and engines (especially if taller or top heavy) pulled over when they're on trolleys. Things tend to move sideways as well. Luckily very little is under any load at all and work OK for display purposes.
In my opinion the biggest problem is lining the engine and appliance up so the belt doesn't come off. At a rally short belts are needed because of space restrictions or the fun police telling you you can't have a long belt, and there lies the problem. Things line up easier and you don't need as much tension with long belts.
I usually drop the wheels of pumps and use a chock with a couple of pegs for the engine. Seems to work OK most times.
In the picture below you can see there's not much tension on the belt, but that all I could get and the pump worked so that'll do. Any more tension to get the pump to work better and something got pulled. You can also see that the two things aren't directly inline with each other. Something else that would make a frame 'difficult' especially if you display different configurations of engines and appliances.
In the second picture is was pretty well dump the engine, a couple of wheel chocks with a tent peg through it and that's that. A long belt. 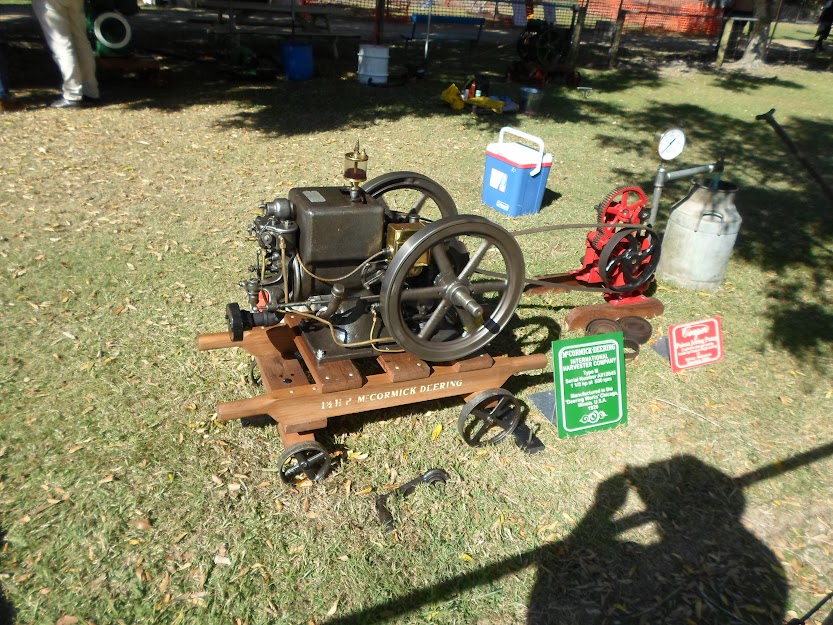 Well that put a smile on my dial ! Thanx to all for your contributions.
I bit the bullet and purchased a John Buncle chaff cutter in quite sad condition but there in lies the fun. It has a flat belt pully fitted so the size needed nay not be too much of a challenge.
In an effort to determine the age of the old girl I found this :- https://www.ozwrenches.com/buncle.htm#2
I'm still no wiser as to the year of manufacture but I enjoyed the read. It has John Buncle engineering cast into the cutting wheel . I presume John Buncle and son came later.
My new toy is similar to the one in the picture below although the pully is traditional 11 1/4" x 3" flat belt.
Cheers again .
Allen

Interesting post there Scotty. I'm yet to put my engine onto my vacuum pump, and wasn't sure whether separate platforms would be an issue belted together but it sounds like it is. Can the answer be as simple as having a stiff bar you can bolt onto the two trolleys to keep them relative to one another?
S

RustyNumbat said:
Interesting post there Scotty. I'm yet to put my engine onto my vacuum pump, and wasn't sure whether separate platforms would be an issue belted together but it sounds like it is. Can the answer be as simple as having a stiff bar you can bolt onto the two trolleys to keep them relative to one another?
Click to expand...

allenf said:
My new toy is similar to the one in the picture below although the pully is traditional 11 1/4" x 3" flat belt.
Click to expand...

They were smart and had a V-belt. A lot easier for a portable display.
Flat belt pulleys with crowns on them make life a lot easier with flat belts. Flat flat belt pulleys are a pain for setting up displays. 1 flat and one with a crown isn't so bad, but can still be a pain if short.
C