I have an engine with one facing one way, the other the other way - an each way bet! My guess is one might have been damaged and the only available replacement was identical to the intact one, so it had to go on backwards. I tried to rectify it but was beaten by a tapered keyway when the flywheel was turned around. At just 300rpm rated speed, it is not under a lot of stress.
Otherwise, I agree with your suggestion.
Ian

Only one casting needed for flywheels, and only machining was different. Kept costs down Most of the steam engines i own with curved flywheels, have the spokes under compression on the power stroke. My grandfather and i used a metal detecter to find a busted uup large steam engine, burried in his back yard. We found the flywheel and a bent crank burried together. The flywheel had been mounted 'reversed' on the crank, and when whatever bent the crank did, all the spokes sheared. They all broke in the same manner. Sure would have liked to find the rest of the engine, but only found some brass valve links and a lot of busted iron
I

I remember this question coming up somewhere before and someone said (not me I don't know the answer firsthand) that it didn't matter which way the flywheel spokes went from an operational point of view because they were only made curved to alleviate stresses from the casting process. Straight spokes were more prone to cracking as the casting cooled and shrank. This is why most of the very early Wolseley and Lister overhead shearing plants with the early straight spokes on the friction wheels were destroyed intentionally by shearers because they were prone to cracking and spraying cast iron over the board which the later replacement curved spoke design that was supplied as a spare part stopped. Didn't endear them to the farmer/station owner but it did happen.
C

Hi Ian,
Is it possible that one of the flywheels was fitted on back to front?
This would make the spokes face the same way then, unless I'm missing something.
K

As Paul said, R Hornsby ran their portable engines with the flywheel direction opposite to the normal and to that on their stationary engines. so I for one do not support the must be in direction of compression, I think it was for decorative, the question has been asked for years with no real answer
T

This subject was covered before on another thread?, anyhow in the short, curved arm/spoke wheels alleviate the stresses caused by the cooling contraction in the casting process, it can also be observed in many instances straight arm/spoke wheels that are stress relieved by having the nave/hub single or double slotted with stay bolts then fitted, many larger flywheels being built in sections for this reason and also ease of transport, as for direction of rotation that seems not a issue? as it can be said there are any number of reversible steamers and even combustion engines out there with curved arm wheels that have passed the test of time?
Last edited: Jun 30, 2019
M

Winchester said:
I am of the opinion that the direction of rotation is that 'that puts the spoke in compression.
Click to expand...

Hello all
Which bit of the curved spoke? If one side (leading edge) is in compression, isn't the other side (trailing edge) of the spoke in tension and vise versa? :shrug:
I think I'd be thinking the correct rotation direction would what the maker said it's supposed to be.

If the curved spoke flywheels have a parallel hub with a single keyway then that flywheel can be swapped around to have the curves face the opposite way, so which way do you put them on?

Just found this an a book I am looking at titled Gas-Engines and Producer-Gas Plants by R.E. Mathot published in 1905. 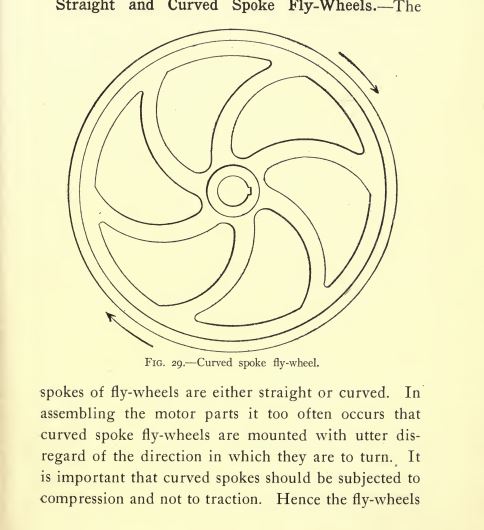 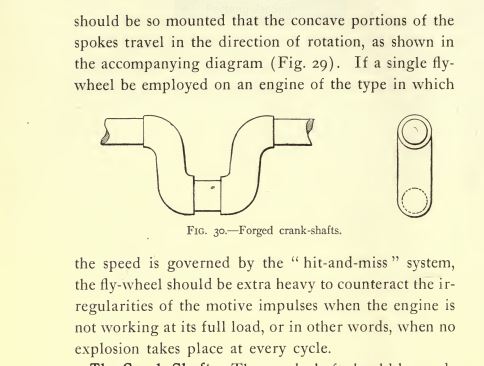 Like the book says, the spokes will be in compression on the power stroke, but on the other 3 strokes the spokes would be in tension as the flywheel keeps the crankshaft moving and delivering torque to the load. Also if a sudden load comes on, the spokes will be under a lot of tension so it doesn't really matter which way the spokes run from a mechanical standpoint as long as they are heavy enough for the loads. Run the spokes which ever way that you think looks nice and you will be fine.
S

Bill Hazzard said:
Like the book says, the spokes will be in compression on the power stroke, but on the other 3 strokes the spokes would be in tension
Click to expand...

Guys I have a Rosebery 4HP , it has the full flywheels on it .
Has anyone put the spoke type on instead ?? Or know what other motors I could get the spoke ones off to suit .
390mm across / 38mm centre hole .

"Guys I have a Rosebery 4HP , it has the full flywheels on it .
Has anyone put the spoke type on instead ?? Or know what other motors I could get the spoke ones off to suit ."

so, what actually would be the point of that?
what happened to 'if it aint broke dont fix it' ?
are you trying to figure out a way to make it broke so you get some fixing to do?
fixing broke spokes will keep you amused for a while, for sure.

if its just a cosmetic thing, to go with the very pretty Rosebery logo,
get some black paint, and paint triangles on the inner flat part of the flywheels, with a gap between to look like spokes.
of course you gunna need 'flat' paint - ha ha.
actually flat paint will be more invisible, to make a 'non-spoke'.
a nice red pinstripe along the 'spoke' just to make it go faster and you got a prizewinner!

I actually think its ok to have some fun with these old machines,
especially when they are 'ordinary-common' type machines,
rather than very rare historically significant items where originality is more important.

If that is what you would like to do a similar engine and brand may have flywheels with spokes and if it has the same size bore then they will fit but by fitting lighter flywheels you will loose some torque and a little bit of hp, this is why engines that drive gensets have solid flywheels.
W

Well Rodney
Here is my reply , the flywheels off my engine have been butchered and the keyways are flogged out and a chunk out of the centre!! Have asked around locally for original ones but to no avail .So lets try options ?? Perhaps spoke type flywheels ??
I put this simple question up to a very mature ordinance only to be answered by a smart arse reply by yourself , mate I feel sorry for you as there is some great feed back on here from guys that live breath old engines not a keyboard warrior like yourself .Sorry admin if this is not political correct , but to me my question was a simple one not to be belittled by ole mate .

Thanks Cobbadog for your reply

Was just looking for options , I may stumble across original Flywheels I didn't realize I had to put my full story forward about why I needed the flywheels as in last post , will take on board your answer .
Thanks again .

I'm not sure which of those old uprights you are talking about Rodney,..but i think some of the early examples,or a relative actually had spoked flywheels on it from original?Perhaps i am thinking of a different make or model?
I did own a 4hp Roseberry,.or more like i was nurse-maiding it for a mate for a couple of years.It was still in the skid mounted shearing plant.It had the solid flywheels.
You must log in or register to reply here.
Share:
Facebook Twitter Reddit Pinterest Tumblr WhatsApp Email Link