Here's One for Paul, Hugh and Other Windmill Nuts

For interest the station I was on had 36 mills,mostly Metters and Southern Cross. When I arrived 2 were pumping so it was a busy few years getting most of them pumping. Our nearest neighbor,35 miles across the paddock had mostly Comets which I helped with sometimes. We had pulled a 12 foot mill down to refurbish the head as it had been pumping since 1935. He had new bearings turned up in Perth out of Jarrah to replace the original Hickory bearings. When we pulled it down we found that there was hardly any wear on them and the mill went back up with the original bearings.
S

Ray Freeman said:
I think I remember some info on them in the Southern Cross hand book that came with the mills. It was regarding how to fit a modern stub tower onto the older style towers.
Click to expand... 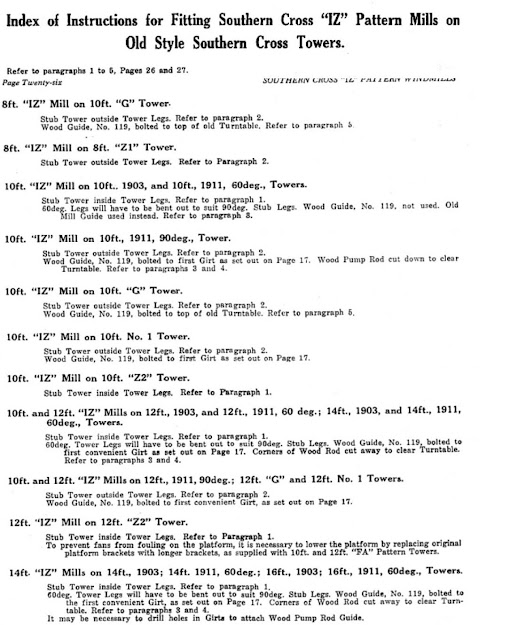 I can say Paul there appears to be no Comets on three leg stands around here only four, as for Bryan all that I see still operating or standing are on four, don't think there has been a new wind pump set up around here for at least fifty years, out on the hay plains today chasing some engines and went past what appears to be ? a scrap yard this evening, was pressed for time so couldn't investigate.

Last time I dissapeared out through that country I think it was heading West from Narrandera?Will look at a map later.I sure would love another cruise out that way with time on my hands.The little windmill in your picture Kim is a Webb,made in Melbourne,and the IZB(or C?) SC can be seen hiding in the background.
Not many of the Sidney Williams Comet windmills down my way unfortunately.I knew the bearings in the open crank models were wood,even in the big ones 30' and larger.I had no idea they were hickory,but was aware of their reputation for lasting.Bryan on the other hand are very local and outsold most others here.I see on their website the three leg version is no longer available.Bryan applied attention to detail with their towers,adding a little extra strap and angle bracing in the right places.After 1950 sometime SC was producing it's wire stayed towers for the IZ mills.The idea might actually predate the IZ,I'm not sure,but they were built to a price,and considered a lot lighter in construction as a small mill.Having said that I still hold a lot of respect for their innovation and engineering smarts.
My favourite among small windmill towers would be a 15' Bryan.Very well made and sturdy with it's sweeping curve in the legs.The current owner at Bryan Windmills tells me the bend in the legs is natural and comes about during assembly,from the narrow end first,and adding the wider crossbraces last.
This little Bryan is from a 1924 patent.Its their second oil bath design and this particular unit is direct acting having a very simple cam and strap arrangement housed in the casing.

typak said:
, don't think there has been a new wind pump set up around here for at least fifty years,z.
Click to expand...

Yeah i know why, i quoted a new windmill job last year and it was a start from scratch installation.
There was no change from 22 grand , not including a tank.
I am putting in a submersible solar pump for now for 8 k.

I priced a little IZA a few weeks back Darryl.That's a SC with 6' wheel on a 20' three leg tower.
It was a little over $6k no plumbing or pump just the windmill. Ordering it with one extra leg on the tower meant pretty close to $7k for the same item.
Pulling water from a depth of 50 feet and depositing it into a tank beside the mill is about the limit for an IZA.It would actually be working fairly hard to do that job.
My 'old' windmill mate down this way assures me that the wheel on the SC is the least "lazy" choice of these little mills used down my way.
S

Darryl said:
Yeah i know why, i quoted a new windmill job last year and it was a start from scratch installation.
There was no change from 22 grand , not including a tank.
I am putting in a submersible solar pump for now for 8 k.
Click to expand...

Hello Darryl
Matey, the solar pumps are only good for shallow bores aren't they? I looked into them years ago and depth was a major factor whether to go windmill or solar.

As a side note: a number of solar pumps around here get hit with lightning. Protection against lightning should be given thought I reckon.

Yeah Scotty, build a shed over them is the answer.
D

Scotty 2 said:
Hello Darryl
Matey, the solar pumps are only good for shallow bores aren't they?

No mate, it's submerged in the channel and is lifting 5mt's and pumping a kilometre on two pannels.
W

Paul Richardson said:
My favourite among small windmill towers would be a 15' Bryan.Very well made and sturdy with it's sweeping curve in the legs.The current owner at Bryan Windmills tells me the bend in the legs is natural and comes about during assembly,from the narrow end first,and adding the wider crossbraces last.
Click to expand...

Hi Paul,
The bend in the legs is unavoidable because the 90 degree angle is wrong for the structure, unless you are willing to twist or bend cross-members, the curved in the legs will be the outcome. Which brings me back to one of my questions on this thread - I doubt that these 3 legged towers are made from 60 degree angle iron, as those too would be curved.
Regards,
Wayne

Hi Wayne.I'm not sure if you have been following the discussion closely,but i think the SC company detail posted by Scotty in post #42 pretty much settled the question of 60deg angle being used in the early manufacture of their towers?
Also I'm not sure if I understand you correctly,about the "curve" that occurrs along the length of the leg of a windmill tower?
It's my experience in dismantling and rebuilding a good number of both three and four leg towers that if a sweeping curve shape exists to the tower,it is only by design.Southern Cross towers would probably be the most common example having straight legs from top to bottom.
Any 'spread' or straightness desired is controlled by the length of the crossbraces.
The Little Bryan tower has a gentle splay in the legs because the crossbraces increase fractionally 'over length' as they (naturally)increase in length towards the bottom.
Most Southern Cross towers,both three and four leg are straight legged from top to bottom.
W

Wayne, i just dont see how your looking at it ?
If a tower has four sides but is ,or is not tapered ,the corners are still 90 degrees at any given cross section.
Wait, i think i get it. If you put an engineers square horizontally against an upright piece of angle iron then lean the angle over while keeping the square horizontal then they wont match exactly. Is that what you mean ?

I'm inclined to think similarly to Darryl in his previous comment Wayne.I don't really see a lot of point to the consideration of a 'theoretical upgrade on materials' used,for a structure that has generally proven itself adequate,for periods of time that have often easily outlasted the rest of the machine and it's technology?
The simplicity of local engineers being able to manufacture a useful farm machine from materials pretty much straight off the local steel merchants rack is something that has been highly successful in it's day.
I'm no windmill expert either I'm afraid.There are some windmill experts looking in here I'm sure.I'm more or less an enthusiast,with a little bit of first hand experience with small windmills.
I suppose the key question to ask you would be for those two designs you noted,square base tapered tower with 90deg angle,and triangle base tapered tower with 60deg angle,...If you felt the traditional materials were "not the right angle",..what would you suggest 'was' the right angle,.or even a complete change of material perhaps?
What are your thought's on the point you are wishing to make?

Been going to stop for years and take a few photos of this , went passed today and had a look, was in better condition until a few years ago when storms went through .

We can see who the maker is Siz,....I will go out on the limb a little and call that one an 'Aqua'?Possibly 5' wheel on that unit,open geared and original pole mount.
I would be making a concentrated effort to find the owner if it was me that was driving by it occasionally.
Knowing what we know about engines you can see that it's a survivor,fixable,....a reasonably rare little windmill.
Added bonus with that one you don't need to find a tower,...just hunt around for a nice seasoned iron bark or grey box stick.

Too many projects to fix now Paul let alone a windmill , don't know who the owner is , down near Bendigo .
S

Paul Richardson said:
We can see who the maker is Siz,....I will go out on the limb a little and call that one an 'Aqua'?
Click to expand...

I reckon I can read Alston on the tail. From experience: I have no bloody idea because I know didly squat about windmill other then oil the buggers.

It looks as though she's only held up by the pump rod.

A windmill tower turned up at the local museum last week. A Southern Cross made from 60 degree angle and wire braces. Apparently a 6' head is going to go on. And me with no camera on me.

Paul Richardson said:
..afterthought,..get it for me!
Click to expand...

I had to have a look on Google for where Minmindie is. I'll have to visit there one day. There's some very quaint place names are there. An awful lot I could not pronounce. Then I saw Inglewood. Beauty....Inglewood is just up the road from here.

Siz said:
Too many projects to fix now Paul let alone a windmill , don't know who the owner is , down near Bendigo .
Click to expand...

...."let alone a windmill"?..Siz?
You will never make 'windmill nut' while you are talking like that!
I do realise though,on a block like that where the little Alston is sitting,it might be quite a lengthy process just to find the owner?Sometimes you can be lucky.I see somebody has been in there with some light tillage recently,or is it just some wheelmarks?
If I knew where to find it i would be happy to chase it.Sometime in the near future I hope to be making a trip to Castlemaine.That makes Bendigo a bit closer.
I was in the back blocks around Shep' a year or more ago and found a 5' open geared Bryan.6 months later I was back in the neighbourhood and located the owner.Short story was "nfs".
I found another 5' early geared oilbath model near Lake Bolac,after a lot of visits and eventually meeting the owner it was the same story.
Here is a 6' open geared Bryan Bro's engine(that's right Darryl,in our special 'windmill' lingo,we call that bit the "engine")This is an engine forum after all