Here's One for Paul, Hugh and Other Windmill Nuts

Nice deep well next to it

,..it sneaks up on you Darryl,..don't say you weren't warned.My advice would be head off to bed a bit early and take a nice flick maggy for the bedside table,..or an Austral start lamp,...so that it's the first thing you see in the morning.
I don't think it will help actually,..you might be on the slippery slope?
You might be able to edit the heading later?,.."Here's one for Paul, Hugh and Darryl"?
That one up the pole is an IZB,..8' SC,current model,but could be as early as the early 1950's?It appears someone up that way had some old windmill technology handed down?They seem to like to mast mount things up there that were never marketed that way?
Last edited: Jun 18, 2019
D

I have to admit, they are appealing to the eye. The well didn't photograph very good ( couldn't say well ) but right down deep it was about 4' square and lined horizontally with murray pine logs. The top bit where you can see had been ripped open with an excavator.

You will know you are infected Darryl when you find yourself unaccountably down in the well,......trying to retrieve the tail spine,..plus those couple of wheel sections.

The old murray pine must be fairly durable timber if it was used for shoring the well?
The trailer looks well stocked too Darryl?That will be some redgum?,..a little bit of grey box mixed in?'Real' firewood in your part of the world.
D

The murray pine never rots and white ants dont touch it Paul. When i moved back to this district 20 years ago we moved into my old man's original house with murray pine floor boards and i got a floor sander and sanded them and the slight heat from the belt made oil come up out of the 100 year old wood. That fire wood is redgum but out in the Patho plains its called swampgum and a 12" bit might have 150 rings on it. Burns hot because it had a hard life growing out there.

Here's the result of a lead I followed up on today.
I currently have 6' and 8' open geared Bryan Bros engines,(both wrecks/unrestored),but this is the very first 10' example i have seen in the flesh.
The ruling principle has kicked in(I see,..I want,..I must have),so I have started asking questions.Waiting now for a reply over the next day or so.
It's quite a large assembly,probably around 3' tall lying in this position.The top swivel balls are larger than 1" diameter.

Bit of work for you there Paul.
Here's a windmill I've modified. Not sure yet if it will work.
Southern Cross about 10ft with stainless 2" syphon pump. Has to pump 2km and 200mt lift up to a homestead on mt Hope.
Leather buckets blow out every year or so, so I adapted hydraulic seals to fit the piston .
Needs 110psi to fill tank. Gauge shows pressure while filling stock trough half way up the hill.

Darryl said:
Here's a windmill I've modified. Has to pump 2km and 200mt lift up to a homestead
Click to expand...

Hello Darryl
Now that's lateral thinking. Please keep us informed about the pump. I, for one, am very curious if it works or not as our pump is 110m down the bore and has to pump another 50m or so up the hill to the tank. When we pulled it up the buckets were pulled and pump was jammed.
We use a pressure gauge at the dairy to see how full the tank is. A pressure gauge is more accurate and easier to read then some of those silly tank gauges. 32 feet head and the tanks full.

By the way, this is what a s/s syphon pump looks like. Don't know about other districts but it's the only one around here.

So Scotty, your pump is pretty deep as is the pump rod. I dont know about deep bores and such so why dont they just drop a pipe with a foot valve down the bore and have the pump up top ? Is there too much weight in the lift the same as any type of pump ?
R

We never put a pump above the waterline more than 25 foot above the water line. You use a strap pump which has the ends clamped with 3 long bolts. The idea being you can go down the well on a bosuns chair. Kick an excess of snakes out of the timbers and take out 2 bolts,loosen the third and you swing the barrel out and service the buckets and valves. Saves pulling the column. Actually a very pleasant job when its 48c up the top.
S

Darryl said:
So Scotty, your pump is pretty deep as is the pump rod. I dont know about deep bores and such so why dont they just drop a pipe with a foot valve down the bore and have the pump up top ? Is there too much weight in the lift the same as any type of pump ?
Click to expand...

Hello Darryl.
I've often thought about that. It may be just a matter of....it's always been done like that. I suppose the main reason would be keeping the water (hopefully) above the pump to make priming easier and/or lubrication of the buckets and to keep the buckets wet to stop shrinkage. Nothing work right when shrinkage occurs. But we can work ours so there's always water above the pump. It pumps up to a tank up the hill which has other forms of filling.
To be honest, I've never heard of a syphon pump as you've been playing with. How do they work?
Dropping 400' of poly down the hole would be easier then 400' of steel pipe and pump rod. A foot valve down the bottom and one below the pump......what could go wrong? That Murphy bloke can't fit down the hole so all should be sweet....shouldn't it?
When Mrs Scotty and I pulled the pump up it was one of those with the new rubber sort of pump buckets that look like the hydraulic ones you used. I don't think there's enough 'meat' there to cater for the stresses of higher pressures like the good old leather buckets with a small hole in them. The bucket simply rolled.

Hello Ray.
Could you explain that a bit better please? A typo I know but it's hard to know what the real meaning is. 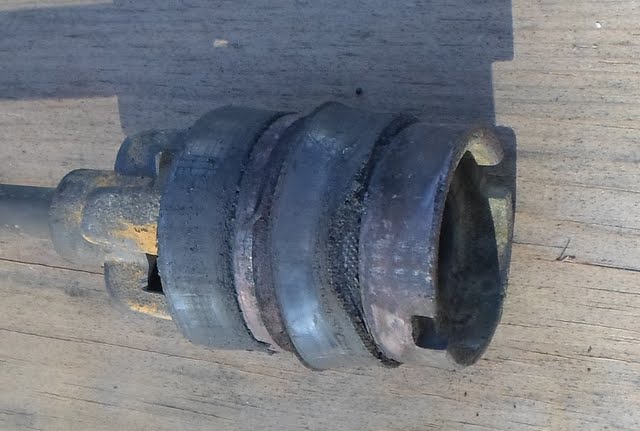 Scotty,another way of putting it is around 25 feet is about all you can suck water without using something like a jet pump,whether it be a piston type pump or centrifugal.
S

Ray Freeman said:
Scotty,another way of putting it is around 25 feet is about all you can suck water without using something like a jet pump,whether it be a piston type pump or centrifugal.
Click to expand...

Oh, you mean a windmill pump can't pull the weight of the water column over 25'?
Cheers Scott
R

Scotty 2 said:
Oh, you mean a windmill pump can't pull the weight of the water column over 25'?
Cheers Scott
Click to expand...

Yes,that my experience and understanding
G

This website will show that you can't draw (suck) water higher than 10m (30 feet approx). At this height air pressure is 1 atm above sea level and net delivery is therefore zero above this height. You can though push water as high as you need, that's why a windmill pump is down in the bore. No mention yet of a differential head for pushing water at pressure above the mill to a header tank. This is an extra pump cylinder and buckets that sit on the windmill pump rod above the bore, and work on the down stroke of the rod, delivering pressure. Typically a smaller diameter cylinder and buckets.
D

That type of pump was in place before i put in the syphon pump.

Ray Freeman said:
We never put a pump above the waterline more than 25 foot above the water line. You use a strap pump which has the ends clamped with 3 long bolts.Take out 2 bolts,loosen the third and you swing the barrel out and service the buckets and valves.
Click to expand...

These things have been around for awhile,but have more or less become obsolete.Around my part of the world they are called a "side bolt" pump.Alderdice in Warrnambool Victoria have manufactured these for four generations.I believe they still stock all parts for them,in which case the buckets and at least one valve are the same as used in a "flush cap" pump.The one that is traditionally put down the bore has the end caps 'flush' with the pump cylinder.
One detail that I have had pointed out to me is that the plunger rings where they clasp the buckets are two different angles depending if the pump was designed to take either the leather buckets or the nitrile ones.The plunger fittings to take the nitrile buckets are slightly angled or dished to cause the bucket to present correctly.
I'm such a novice with these things I have to admit that it's either that way or the reverse,but I'm fairly sure that
the leather fitting surfaces are made flat in the Alderdice pumps.
Few enough of the side bolt pumps are serviced by the maker,to the point where the youngest in the proprietors family gave me a call the other day for some advice on fitting a new bottom flapper valve in a side bolt pump.
These particular pumps found their way onto parts lists and catalog diagrams for Bruce & McClure and Bryan Bros windmill manufacturers,along with a number of other Alderdice made windmill related plumbing.Unless I'm mistaken the pumps pictured are identical to those offered in the 1913 Bruce & McClure sales catalog?
With ground water so close in my neighbourhood it's kind of local knowledge that a windmill pump is close to it's limit for lifting water at around a single length of pipe.My side bolt collection has grown in the last year or so,and a while back I came home with a little 2" version.As Ray mentioned,they are such a great little pump from the perspective of service.Just undo the large brass nuts and knock the pump apart to work on it.Again,..these pumps were commonly used at dams creeks and shallow bores,mounted in the lower part of the windmill tower,often having a simple elbow in the direction of the dam or creek.

I’m on SMOKSTAK up & over and just finished reading the full thread down-under on windmills, and can say I liked the discussion. I got Windmill Fever - Years ago and spent a lot of time chasing windmills up-over in NJ/Penn and I found a few, but they were usually too big for me, NFS, too pricy $$’s, too far away, etc.. But I kept on looking. Then one day back in July of 2008 I came across an eBay listing for an IRON MAN windmill that was just what I was looking for. It was one of the last few of a 25 unit run of a working scale, Aermotor 702 windmill. It has a 4’ fan unit, a 4’ stub tower and a 14’ tower. It was priced right, and I ordered it. The fever subsided after it was delivered in 5 boxes with some assembly required (like all of it). Here is a picture of it at a local show on the trailer. You can see more of the story at the following link. THANKS for the thread .
https://www.smokstak.com/forum/showthread.php?t=49516

Thanks Paul for sharing that story!
I do remember stumbling across one of those little 4' Aermotor copies on the net not long ago.Immediatly i put a lot of effort into searching for a supplier,but came up empty.Now with your detail about the limited numbers manufacture run i understand why.
I think if somebody was continuing to supply them they would be very popular sellers?
You must log in or register to reply here.
Share:
Facebook Twitter Reddit Pinterest Tumblr WhatsApp Email Link