The earliest "Jacobson Machine Manufacturing Co.", ad I've seen is from the Warren Evening Democrat and is dated May 25, 1900. There is no indication that they made engines at that time.

In another book I found a mention that Jacobson Machine Mfg. was "organized" in 1901.

I still have not found an ad prior to 1906 indicating that they (Jacobson) made engines.

I am looking for someone having access to a copy of "Gas Power" dated May 1909 who would be willing to scan and send me the color ad depicting a Jacobson "Mascot" engine.

Hi Don, no, I was looking specifically for the color ad in the May 1909 Gas Power magazine or any other issue with the same ad.
Thanks!
Denis Rouleau


Don Worley said:
Will this work?
Click to expand...

Here are my pics. I emailed the same to you Dennis. I bought it this summer at an estate sale, it was the only engine.

Thanks Steve for finding time to send in the data and pictures of your engine for the Jacobson registry. I've entered it to the registry which you can find here: http://buzzcoil.brinkster.net/moody/000index.html along with all the other pages I've put together for the Jacobson engines and some of its history.

I also want to thank Don Worley for much of the stuff on Jacobson he is sharing with me and with all of you at the same time.

I want to extent an invitation to all Jacobson engines owners to send me info and pictures which I will promptly add to the Jacobson registry. Included in this registry are the Ward, Bull's Eye, Unito, Maynard and all the other engines built by Jacobson in Warren and in Titusville.

SteveK said:
Here are my pics. I emailed the same to you Denis. I bought it this summer at an estate sale, it was the only engine.
Click to expand...

I have to show you the oldest (for now at least) and the biggest Jacobson engine (25hp). 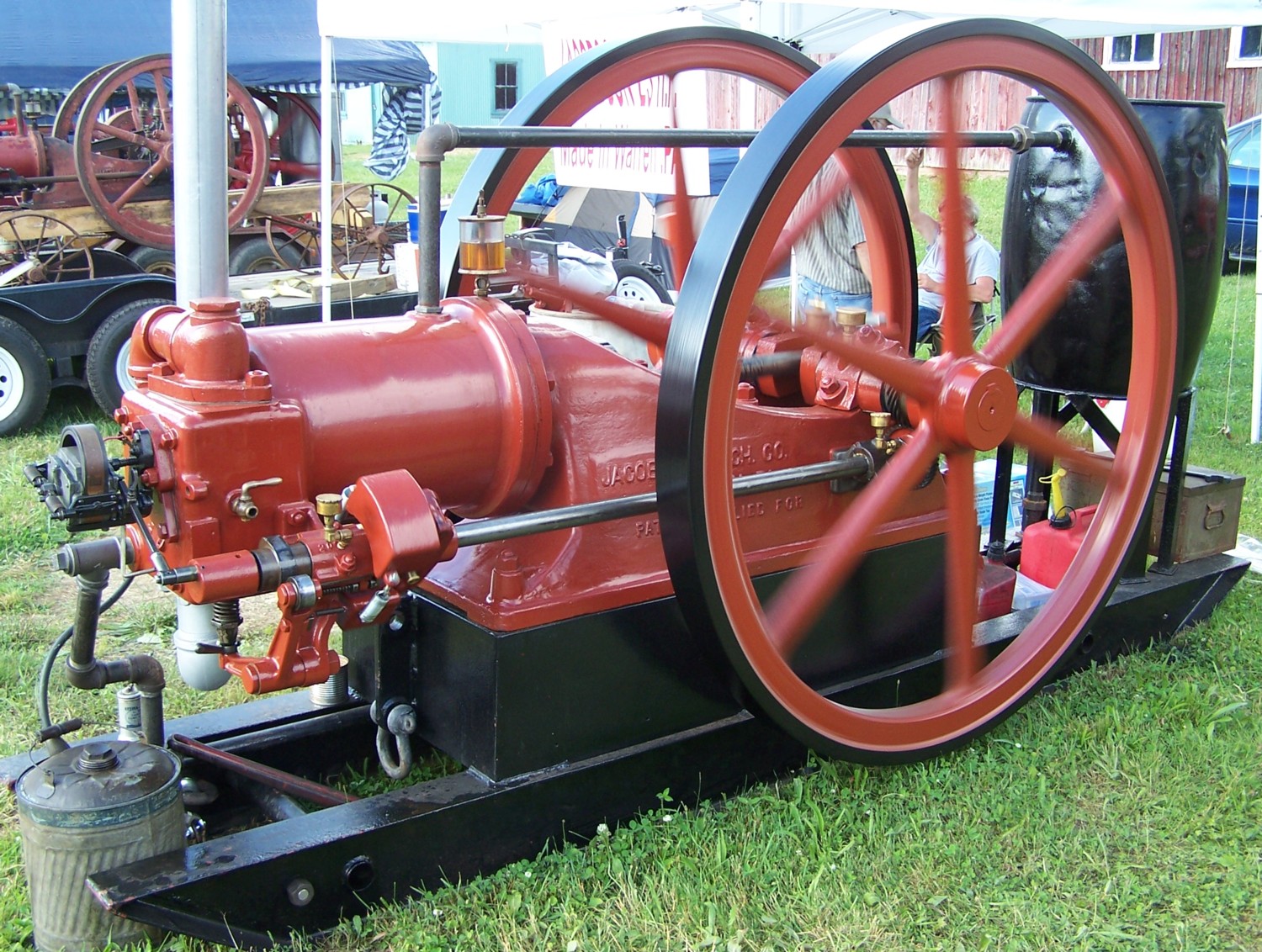 
Denis Rouleau said:
I am looking for someone having access to a copy of "Gas Power" dated May 1909 who would be willing to scan and send me the color ad depicting a Jacobson "Mascot" engine.

Hi Denis,
I have some Gas Power, but do not have that one.

Try Jeff Wahl. He has an extensive collection of Gas Power and is posting adds from them at:

Thanks Len for the suggestion. I've been closely following Jeff's thread about vintage ads from Gas Power but I don't think I've seen anything about Jacobson.

Jacobson engine ads are few and far between, contrary to some other engine builders that advertised everywhere and regularly, Galloway to name one.

Len, if you have anything/something for Jacobson in the Gas Power you have I would sure like to see it. This invitation is to everyone with any vintage magazine with Jacobson ads in them.

Sales literature is also great to tell what was available from a certain engine manufacturer but they often is no mention of the year the literature was issue. Ads in magazines are great as you know when it was issues right down to the month/day/year.

So don't be shy and please email me anything you see pertaining to Jacobson Machine Mfg., Warren Pa. I will create web pages with these ads and share the result with everyone.

Len Spoelman said:
Hi Denis,
I have some Gas Power, but do not have that one.
Click to expand...

Here is the oldest know Jacobson (to me). It is engine #1020 which is believed to be the 20th Jacobson built as Don is inclined to think that Jacobson engines started at engine #1001.

I was not able to tell for sure in what year Jacobson built their first engine but I've found evidence that they were building engines in 1904.

Don, do you have indication that Jacobson built engines prior to 1904?

I do not have any proof, but local legend says possibly 1901. The earliest proof in print and other local legend is 1903-1904. It would not seem practical that an engine such as 1020 was one of the first engines made. It would be more logical that production started with the 4 HP oilfield engines on a trial basis. Charles Jacobson didn't get much financial backing until about 1903, and by about 1907 he was no longer a main character in the company.

Maurice, is this your Unito engine? http://buzzcoil.brinkster.net/moody/page112.html

If so can you provide me with the serial number and hp for the Jacobson registry?

Hi Denis Yes that is my engine Horse power is 2 1/4 serial number is 13053. Thank you for including it in the registry. Maurice
B

Denis and Don,
Do you have enough information to start to estimate the breakdown in manufacturing dates for the listed engines?
Brian


brl115 said:
Denis and Don,
Do you have enough information to start to estimate the breakdown in manufacturing dates for the listed engines?
Brian
Click to expand...

I can't speak for Don as he has been around Jacobson engines for a long time and he might have more relevant information that might help tell when a certain engine was built.

Myself, I am not in a position to determine when a Jacobson was built right now BUT when we reach the 100 to 125 engines in the registry I am sure I will be able to give a good estimate as to when most Jacobsons were built.

So please keep registering your Jacobson engine(s) and sending in Jacobson ads from old magazine.

Seems to me that a good percentage of Jacobson engines were built during the second period.