Just another project The BSA 420

Just for you Cobba
Back on the 20th November 2019 I came into the possession of a BSA 420 power unit.

Since then it has had tht tin ware stripped, carby and maggy removed and the wasp nests cleaned out of both and between the fins of the head.
Will go through my files and find pics later.
Just a stater Cobba
Cheers Dobbo

Dobbo56 said:
Just for you Cobba
Back on the 20th November 2019 I came into the possession of a BSA 420 power unit.View attachment 396979
Since then it has had tht tin ware stripped, carby and maggy removed and the wasp nests cleaned out of both and between the fins of the head.
Will go through my files and find pics later.
Just a stater Cobba
Cheers Dobbo
Click to expand...

Carby before and after 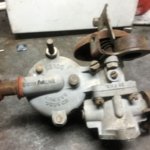 Thanks to Scotty for sending me a manual for the Lucas SR maggy that allowed me to strip, clean and reassemble it to look like new. Haven't done a final test on it yet as the impulse starter has me a bit baffled, I seem to have it back together or as I think how it goes.
Moved on to other tasks, took the head off to check the piston and valves, decoked both and then removed the barrel to check the rings as there was more than a bit of sideways movement of piston in the barrel, tok top ring off and placed it in the bore to take a measurement, manual states .2 - .3mm gap I've got 2.4mm gap ordered a new set.
Got a gasket kit for the carby and engine from VACES ( Vintage Air Cooled Engine Spares) just down here from home, Stephen Woods how has been very helpful.
More later need to go to shed and try Scotty's informative ideas to fix the M's fuel pump.
Cheers
Dobbo

Next job was to clean off the years of farm dust from being left standing in the shed near the open doorway. Found thee serial number.

Cleaned tin ware to bare metal and primed ready for my cousin's hubby to paint (why bark when you have a dog), I'm good at primer and sanding. Found 2 manufacture dates 2 on the tank near fuel outlet AHC 1956 and the other on the cowl near the spark plug hole AHC 1954. All will be back on Monday night nice and shine maroon painted.

Very nice work Dobbo. That SR Lucas was a mess and you cleaned it up a real treat. To think that engine is in the mid 1950's and is a 420cc, we used to paddock bash and old BSA 500 1948 model and the stroke on that engine was longer than your complete engine. We had no twit grip on it eith and used a lawn mower hand throttle. None of us were heavy enough to kick start it so it was a tow job using another bike and length of rope.
R

My Uncle had a couple of BSA engines. One on a swing saw and the other on a post hole borer. Both good reliable engines
C

There was one of those swing saws or Argon or Hargon saws in the pitt where we had the paddock bashers too. We never could get it to start.
R

My old man made a living with a Mobilco shaft drive swingsaw cutting posts. It had a Model 5 JAP on it. He passed not so long ago and one of my jobs he told me to do was restore it.
C

My father and a neighbor shared a Mobilco saw which they used to fell and cross cut Jarrah timber to fence virgin farm blocks in the early 1950"s near the South coast of WA. My first job after leaving high School was to assist with log splitting to produce fence posts. After cutting logs to post length we used a log splitting gun to open up the log prior to reducing it to posts using sledge hammer and wedges. The splitter was a tapered hollow steel shaft which was filled with a black powder charge, driven into the end of the log and fired using a powder fuse similar to a cannon. Most times it reduced the log to 2 or 3 segments which were then much easier to split into posts with hammer, wedge and axe. Those swing saws were a great tool in the right hands, but were also known as "widow makers" for obvious reasons.
Dennis saws were made in WA by the Schulstad company, who built their own quite successful 2 strole motors to power them. The twin cylinder version was almost unstoppable, and earsplitting loud. Kind regards,
Combustor, (Murray in Kununurra)
S

Combustor said:
Those swing saws were a great tool in the right hands, but were also known as "widow makers" for obvious reasons.
Click to expand...

I found a swing saw many, years ago (I was about 22/23) and sold it straight away. I could see myself damaging myself very badly with it. I actually got pretty good money for it if I remember. I do remember I bought a Kalita beach buggy with the money I got. Apparently I wasn't so young, dumb and full of .....
R

Here in WA fence posts seem to be mostly split. Around Echuca in Victoria they were sawn. The procedure was that the trees allowed to be cut in the State Forest were marked after a permit was granted. The trees were felled using the swing saw then sawn into the correct lengths. Dad would mark the end of the log with the axe and insert a chip. That was the aiming point as he cut along the log. The saw was built to straddle the log. Once the first cut was done posts were cut out by tilting the blade thus taking segments out of the log. Then the the log was turned with crow bars and the process was continued. Transport was a Nuffield Universal tractor and a 16 foot trailer which was made from a 38 Bedford cut off from behind the cab. All loading was done by hand . All hard Yakka.
I

Ray Freeman said:
My Uncle had a couple of BSA engines. One on a swing saw and the other on a post hole borer. Both good reliable engines
Click to expand...

My dad bought a "Bantam Bushclearer" portable circular power saw in about 1950 with that exact type of engine on it ! Dad had a couple of close squeaks with it and also almost cut his foot off with the horrible thing but survived even if he did have some scars on his leg ! When I went back to the farm one of the first things I did was remove the engine, the wheels and the circular saw blade, put them away and then put the rest in the dump where I considered it belonged ! (it used to scare the ##### out of me) About 10 years later my brother put it back together again and built a saw table on the front of it to cut cord wood for his fire and it is still in working order and being used today ! In that past 70 years as far as I know "nothing" has ever gone wrong with that old BSA engine. As well as working on the power saw it also saw service on a grain auger for several years, ran the shearing plant when the Petter broke down and did about 6 months work driving the 32 volt lighting plant at the house when its Moffat Virtue engine threw a rod !

It's nice to see one being put back to good order because the quality of these engines is magnificent and they deserve a lot of respect for the way they did their work !

I've been watching on evilbay a package deal of 2 x 420 and 1 x 320 bezza's for a pretty good price. 1 of the 420s is mounted on a Mobilco, don't know if that is part or the deal. When we are allowed more freedom of movement, as they are about a 2.5 hr drive from home, and that's if they are still up for sale I might go have a look, I have to pick up some free stuff not far away from there.
Spoke with the relo today and he has finished painting the tin ware and will bring it home tomorrow for me, just another step closer to getting it back together, just need the rings. In the meantime I will build a transporter for it and a little Kelly & Lewis centrifugal pump that I rebuilt, should be a good rally display.
Cheers
Dobbo
C

Well Dobbo, you can go for a drive from the 1/6/2020 going by what Galdys has told us and is why we have already booked an 8 day trip away with the van and yes we have checked that the places we are heading will have the places open for us to visit.
Back on those swing arm saws, there was one fully restored in imaculate condition for sale at last years Yesteryear Truck show. It had an accessory I hadn't seen before but to others it may have been common place and that was a set of wheels at right angles to the saw so you could roll it side ways to make your next cut.

Just got the tin ware back from painting, colour match from a small patch on the cowling, now can't wait for the rings to get here.

What a great finish he got on that paint.
S

Dobbo56 said:
Just got the tin ware back from painting
Click to expand...

They call that colour Queenslander Maroon don't they?

The stories told above is the main reason I tend to take what some people consider 'common' engines to rallies. People tell me their stories. I really enjoy the stories. It makes sitting/standing there for a day or so worthwhile.
Last edited: May 25, 2020
C

Scotty I think you have to adjust the monitor if you think that is Qld Marooooooon.

Had a little time whilst waiting for another show to stop so I pulled out the fuel tank and put the decals on, looking good.