Kohler Light plant needed something to do 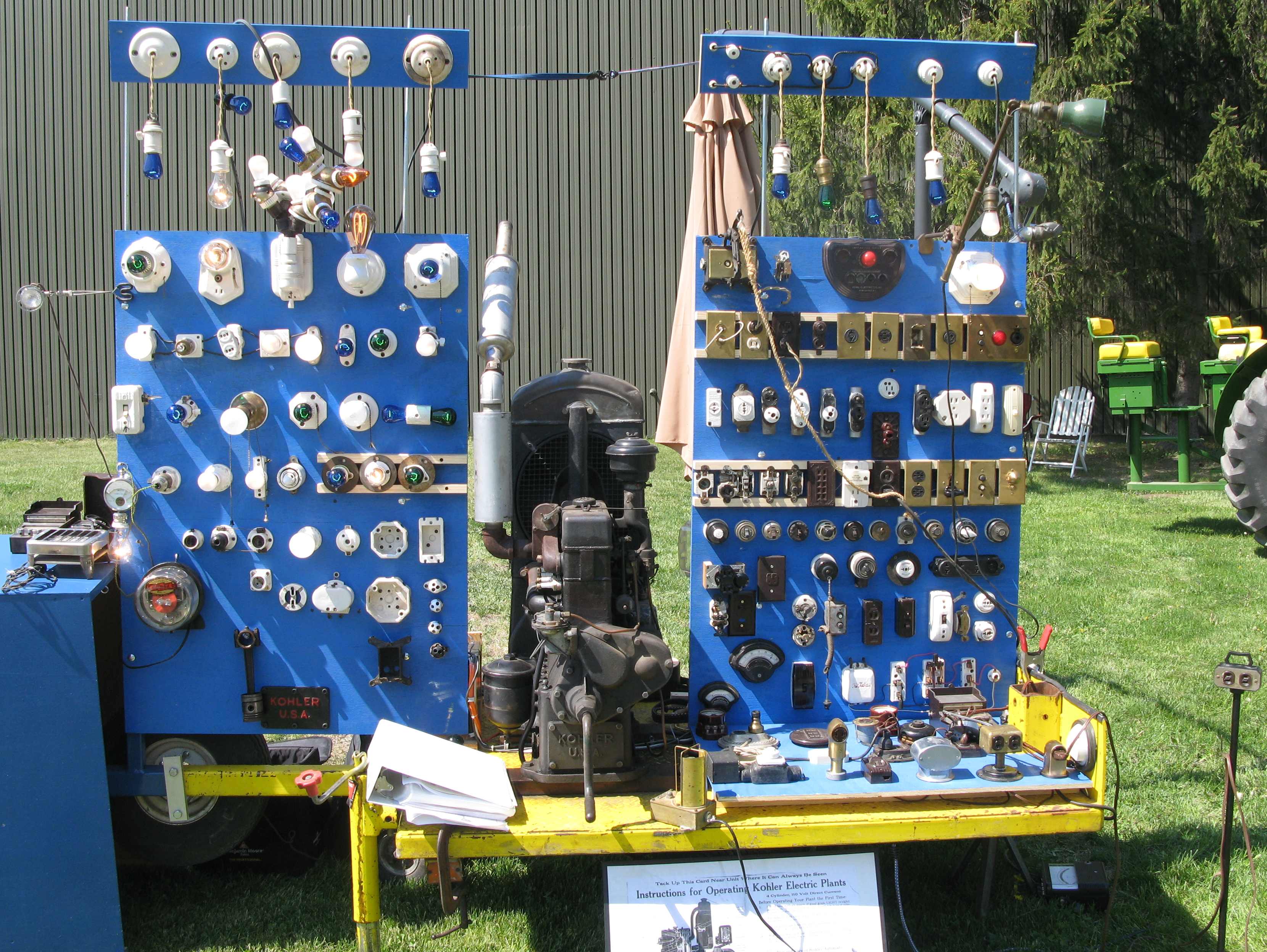 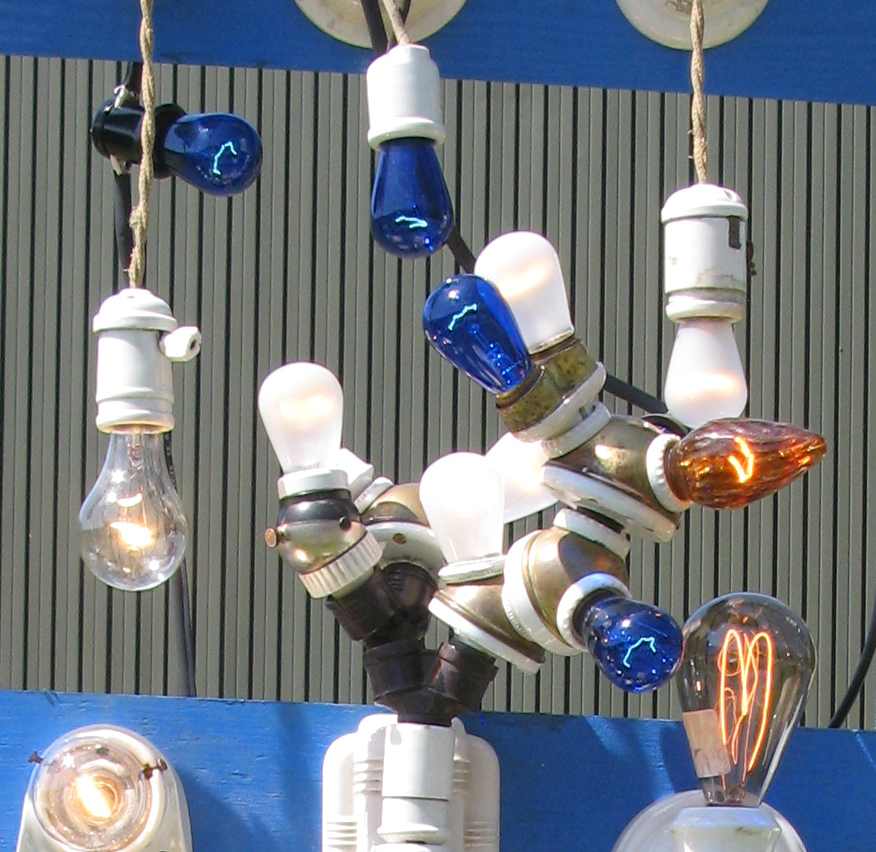 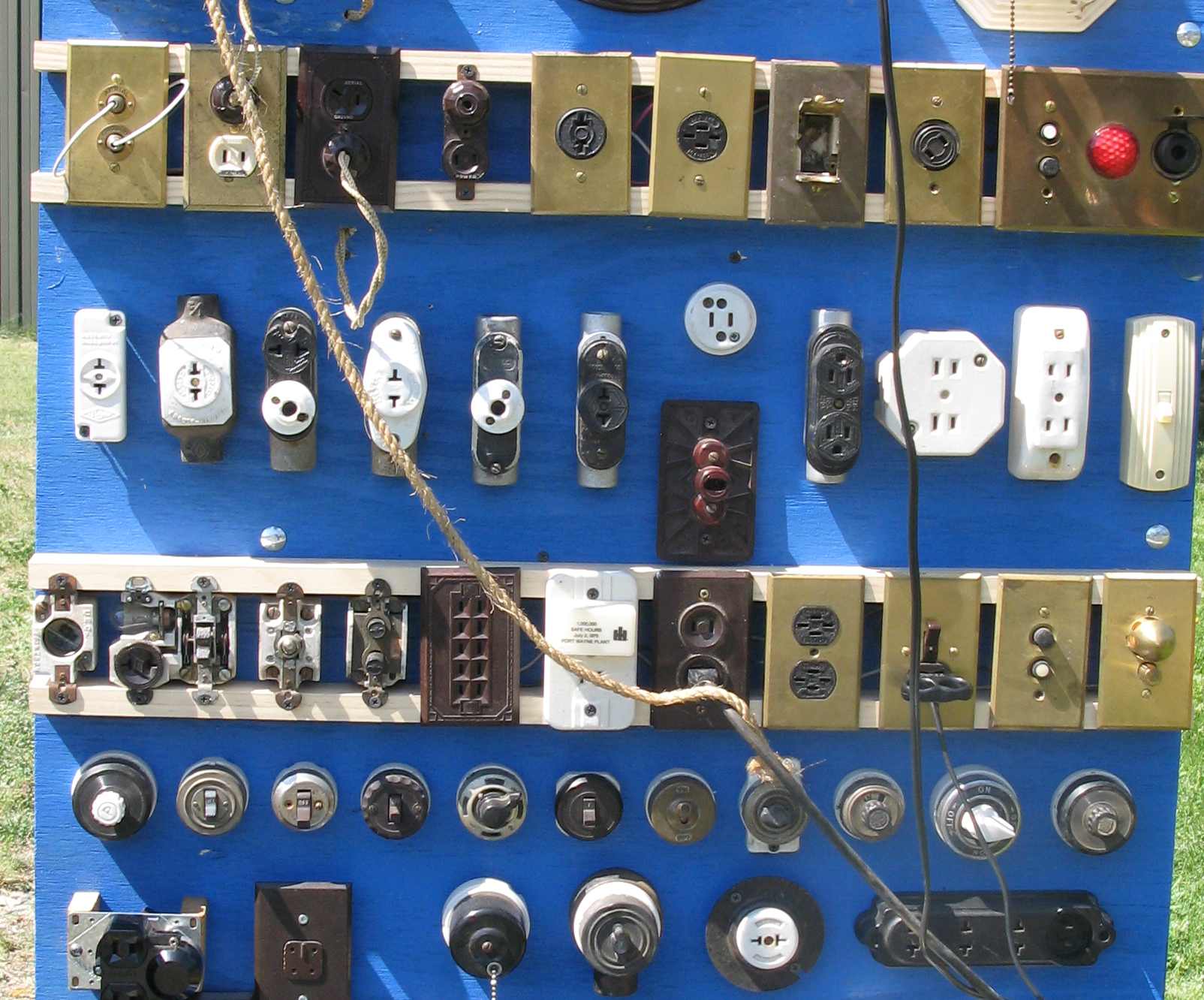 Lol! I LOVE it!! Have I discovered a fellow lightbulb collector??

I don't collect light bulbs, just the fixtures, I enjoy following the history of progress with them.

I also enjoy the fixtures, though my collection pales in comparison! That's a beautiful collection you have there.

Is that NEMA compliant?
Doc
K

It's interesting seeing how things have changed over the years, but not so interesting when you are doing a remodeling project, need to replace one piece, go to the store and hear "We haven't done it that way for years, now you need to replace the whole system".

The nice thing about standards is that there are so many of them. Take your pick.
L

Those all look UL approved.

The system is OHSHUCKS approved........ And there is a GFCU outlet on the back feeding all of it, and a antique key operated switch to turn it off when I am away.
E

Kieth, I have one. Can you identify it?

Frank, I have a very old fixture also, later.

That is an attention getter, I noticed also a rare chrome in line meter, lower left of main pic, I have a similar unit and wonder if there is any providence you can share.
No manuf. markings, other than its scaled in watts, thinking they were to verify wattage of early lamps that were in C.P. (candle power), apparently a standard lamp could be 8 cp/16cp/32cp etc.,

Ed, I wouldn't be able to name the make, but can say it's a "Mazda B" lamp, first introduced in 1907, I believe. Most had paper labels that are long gone, some had printing on the glass that wipes off easily. Your is likely late teens or twenties, probably 60 watt, based on the size. The Mazda moniker was licensed be GE to many different manufacturers, and in this case indicates tungsten filament. "B" type lamps are vacuum, "C" are gas filled.

The introduction of these lamps saw the change from candle power output rating, to watts consumed rating. This was purely marketing. The 16 cp metalized carbon lamp consumed 51 watts. The 40 watt tungsten lamp developed around three times as much light. Electricity was (even more) expensive back then, so consumers would have been inclined to believe that this new lamp would cost more to operate since it's so much brighter.

Run these on reduced voltage and handle them with care. They're old, their filaments are very fragile, and they were made for anywhere from as low as 104 to 122 volts, in two volt increments.

diggin4s said:
That is an attention getter, I noticed also a rare chrome in line meter, lower left of main pic, I have a similar unit and wonder if there is any providence you can share.
No manuf. markings, other than its scaled in watts, thinking they were to verify wattage of early lamps that were in C.P. (candle power), apparently a standard lamp could be 8 cp/16cp/32cp etc.,
Click to expand...

Mine is marked in watts and in cents with 100 watts = about 1.1 cents. The plug is a Edison screw but similar to fuses I have seen from Australia
The face says Watts Lampe Metre

Half scale is about 50 watts.
D

Thanks Frank,
It basically confirms that what I have is same.
The other units I have vary as to scale markings, but in effect are to give a wattage estimate.
The GE unit I have have stepped scales for various input voltages, but basically is an ammeter with watts scales.
Unless they were used at the village they were calibrated for, it was only an estimate.

The purpose of the cents scale was likely to have someone from the early lighting utility give you the cents/lamp for a week/month or whatever.
In the early 1900's the cost of a revenue water meter was well above the revenue generated for a year.
A

Gotta love those lamp fixtures hanging on bare wires! reminds me of old knob and tube wiring at my old home! most was disconnected, the insulation would fall off if you looked at it hard enough I was cutting some of it down, and thought it had been all disconnected. WRONG! The bare end fell on the old abandoned oil tank and produced a loud explosion and lights out in the basement!

Turns out the former owner had tied the old wiring directly to the 100 amp mains - which when shorted to the oil tank, blew a 1/2" diameter hole in the 1/8" thick steel shell!

Tired of replacing those pesky fuses? Bypass 'em! Lol, you've got to love the things some people do, especially electrically!

I was once the electrical contractor on the rebuild of a house that had burned due to a kitchen fire. The "general" (a VERY generous term) was an extremely uneducated individual from a third world country that just thought he knew EVERYTHING. He said he figured he knew "80% of electrical", then went on to say that he knew how to connect to an existing receptacle, go to a switch, and add those abominable can lights to a room. Wow! Made my commercial experience look like a walk in the park!

The main panel (Bulldog Pushmatic) was still intact, and thus available for temp power. So this "electrical genius" (the only human being to have single handedly managed to gather 80% of the total knowledge of the electrical field) connects some MC cable as follows:
White: to neutral / ground bus. Check.
Black: to a breaker on one side of the panel. Check.
Ground: to a breaker on the other side of the panel. Priceless.
So the entire metal clad cable, the box with receptacles, and anything with a ground plugged into them, was energized relative to ground. :0

I guess that must have been part of the other 20%!

I like the Babson Surge electric fencer. I got one but the red label is missing.

len k said:
Looks like some of the stuff we have in boxes in the cellar that dad was saving to use one day

Tell me more about what's in those boxes. Grin

The wires to bare termanels carry no voltage. One is a two part fixture. One part was fastened to the cealing and wired. A hanging socket was connected to the second part and they would bayonet together. I fiddled with the inside and ran a lamp cord through one of the holes for screws into the removable part. That caries the voltage. The other two are essentially porcelin strain reliefs and I sneak the hot wires through the board. The exposed wires are for show.

If you look on the left side there is a blue bulb next to a light switch. A close look shows that that socket has a turn switch that you can feel around in the dark to find and then turn on the light. That socket also has bare terminals!

Wow! In this case they are covered with RTV

Been thinking about this post for bit, If anyone comes across some of the old Aluminum building wire I sure would love to get a piece if someone can run across some of it.

I am also hoping to salvage a working fuse box from a old house that is complete.

Robert, the house I'm living in right now was all wired in aluminum except for the two lighting circuits. I've removed every last inch of it, and it's all in a barrel, waiting to go to the scrapper. I'd be happy to give you some but I'm far away here in Kalifornia

Oh, and I too would love to have a complete fuse box. Most of the homes in my area were built after that era, unfortunately. Hence the aluminum wire. So I've yet to run across one.