The family and I spent a better part of the day today at the Morgantown KY show.

We had a really good time - the five year old love the bouncy castle, my wife and sister-in-law enjoyed the crafts and spent some time talking with a nice woman there who was running a spinning wheel. Sister-in-law has wanted to learn to spin for some time now, so she was *really* happy.

The show was mostly a tractor show - and while I do enjoy old tractors, I'm more of an engine guy. The only tractor I do own is an early 70's Yanmar diesel which I don't think is show-material.

I took some photos of the show, the kiddy barrel train which I thought was extremely clever, and some of the engines and implements I saw there.

First an overall view of the show. LOTS of tractors! Wish I had a wider angle lens as this photo doesn't really do it justice: 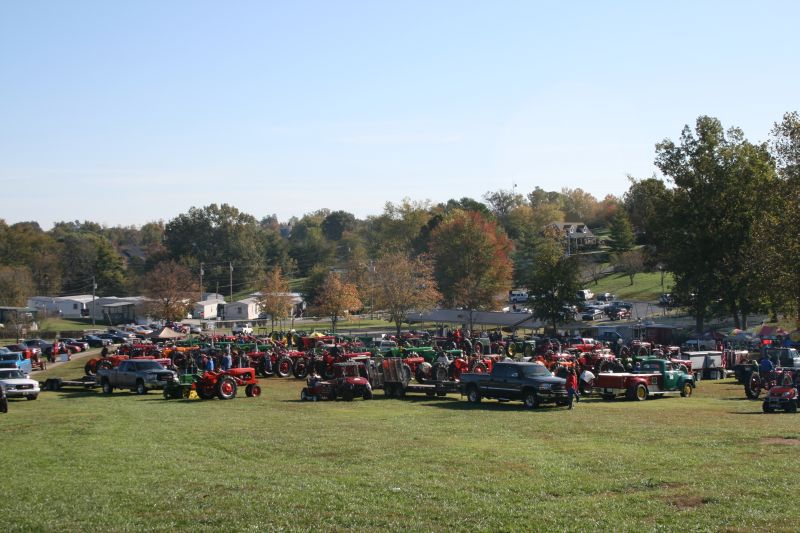 Next up is an unknown (to me) hit-n-miss engine. Being a camera geek, I took three different photos playing around with shutter speed to try and convey the fact that the engine was running: 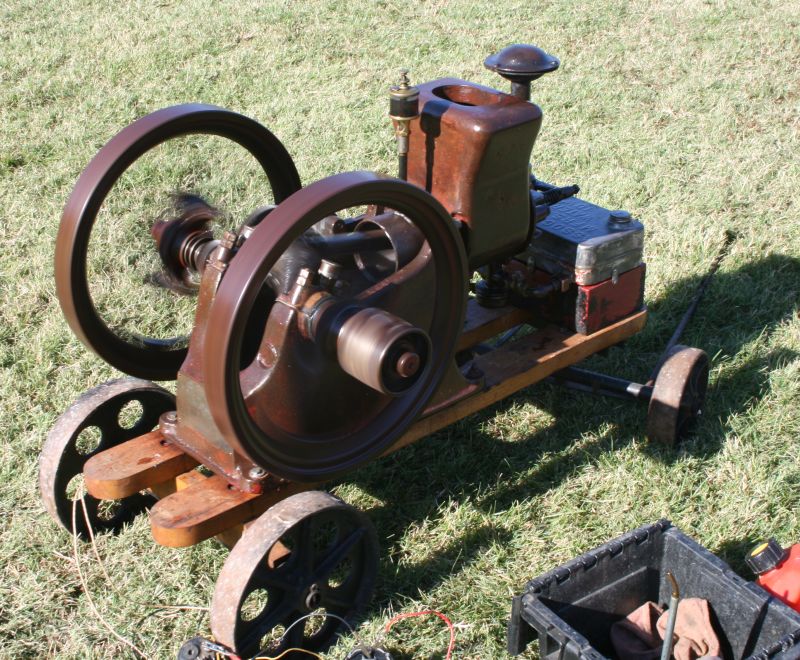 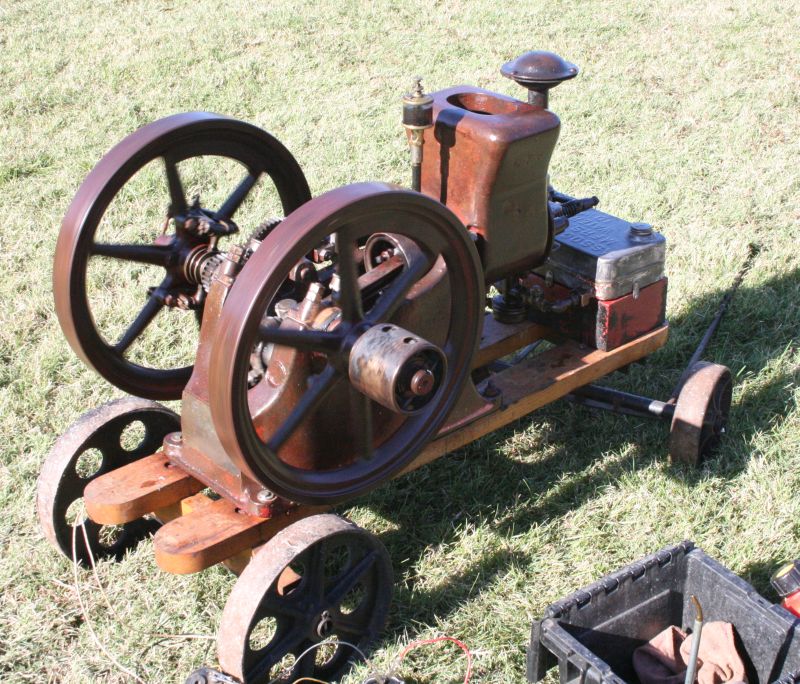 A walk-behind tractor that fascinated me. My wife was fascinated by it as well and asked if Fairbanks-Morse made it. She was looking at the magneto on it. I later found a tag on it saying it was a standard tractor.

We went last year, great show & friendly folks! Couldn't make it this year due to my work schedule! Great BBQ lunch there too!

And now my favorite engine of the show. This little engine was chugging along the whole time I was there. It never missed a beat. 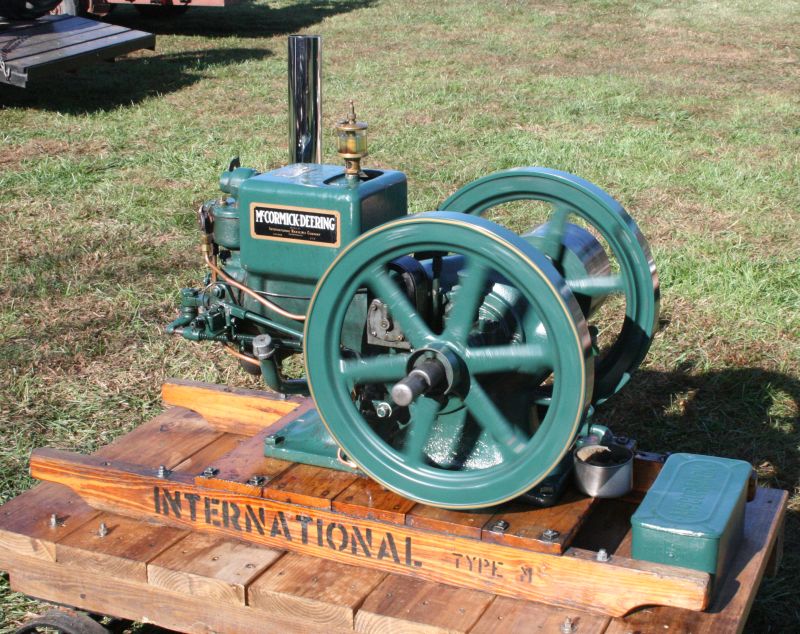 And that's about all the photos that turned out okay. Like I said earlier, I'm a camera geek so I take a LOT of pictures but only a few ever really turn out well.


Kelly Reynolds said:
We went last year, great show & friendly folks! Couldn't make it this year due to my work schedule! Great BBQ lunch there too!
Click to expand...

I'll second that - great show, very well done, very friendly folks! Especially at the front gate - we drove up, I dropped the window, and they treated us like we'd driven a thousand miles to come to the show! Really made us feel welcome.

I've also got to add that these folks did a great job planning for the kids. We've got a five year old boy, and while he loves tractors he gets bored quickly like any other five year old. So the bouncy castle was much appreciated as was the playground across the road. What a great venue for the kids.

I didn't sample any of the BBQ - the five year old had a cold that kept getting worse - so we left just before lunchtime to head back south.

The tractor parade was also very nicely done - with announcements of the owners and types. My wife and sister-in-law said that they we all need tractors so we can drive in the parade. I laughed and said that if my inherited 1970's diesel Yanmar wouldn't have gotten laughed at, I'd drive it and pull them in a cart.

Thanks much to the folks who put on the show there!

thanks much,
ben
B

I have to start by saying that I am sorry that I didn't make it to the show this year either. I loaded everything up Friday evening, looked at my trailer tires and got a little nervous. Went to Rural King and bought a spare. Took off Saturday at 6 AM blew a tire at 6:15 AM just past Lynnville, IN. Put on the spare and decided that all the tires were the same age and I wouldn't have a spare.

I would like to thank the Association for the personal invitation during the SIAM show and the flyer that you sent as a reminder. Hopefully I will see everyone next fall.

Thank you for attending Ben. I am glad you had a great time. I told you we were a friendly group.

We normally have several more engines than this, but several of them had to work or were sick. I don't understand why our flea market area wasn't there this year. Last year, the park was full of vendors.

We feel that providing free entertainment for the kids will help the future of our club and what we are about. As kids will want to go to these events because they are fun and eventually grow up to have a tractor or engine of their own. After all, they are our future.

We are always thinking of ways to expand our show and make it bigger and better than the previous year. As most shows across the area had less exhibits this year, our show continued to grow. We had about 20 more tractors, 40 less engines, 25 more lawn tractors, and about 40 more misc. exhibits.
You must log in or register to reply here.
Share:
Facebook Twitter Reddit Pinterest Tumblr WhatsApp Email Link
Top