Most Unique or Oddball Engines

Rich Mueller Sr said:
Dad used to tell me about working on Willis Knight engines ,I know not stationary, but automobile, although there where a couple sleeve valve engines made for stationary work , cant remember the name of it at the time. After a little wear to cyl it would use more oil than gasoline, and look like a giant chainsaw engine chugging down the road. The sleeve wasn't stationary it moved up and down and was the valves . . . .
Click to expand...

I don't have any pictures of it, but 42+ years ago Dad restored a Silent Alamo Generator (looked similar to a Delco Light Plant) that had a Sleeve Valve, but unlike the "Silent Knight" it had a ROATATING Sleeve (which was missing when Dad got it).

Owning a Garage/Repair-shop and having several local parts-houses nearby he sourced a suitable cylinder sleeve for a tractor (I never heard the make or model) and cut the gear teeth around the lower end of the sleeve to mesh with and drive off a gear on the crankshaft. Then he laid out the ports by rotating it through the motions and marking the timing locations on it, and bored them out to match the ports.

Made for a Nice Running Engine when done.

After Grandpa died in 1979 and Grandma put the farm up for sale, all of Dad & Grandpa's Tractors, Engines, and other Equipment got sold off at auction during our Threshing Show that year since he had no place to store everything with the farm being sold. I have No Idea where That Engine ended up going, but it was somewhat Unique, even if unassuming looking on the outside.

MFaris said:
Along the same lines of the "Less than 10" thread from a few years ago, what would you consider the most oddball or unique engine you've seen or know of? To be considered the engine has to have at least one remaining example and have features that would have made it unique even when new. *This would eliminate a slide valve engine from consideration because that was standard technology when it was built; even though it's a very unique design today.

My submission for your consideration is the Rumsey-Williams integral frame engine:

That's really neat I don't think I've ever seen anything quite like that.
C

This is one of my Willys Knight sleeve valve engines with the head off.
2 sleeves that move up and down on connecting rods connected to a separate 2 throw crankshaft that is geared to the main crank.
The head is shaped like the piston and has rings, 1 of which is 1 inch wide!
Not like anything else I've ever seen.

Another one of those pesky slide valves. A 6 cycle griffin @ the Bath Museum in the UK.
(Stolen from Wayne’s book)

I'll have to do a little digging for pictures and video on my computer. The Adco engine with its rotary valve would certainly qualify. Only one survives to my knowledge. Not the best design for an engine designed to power a hay press.
F 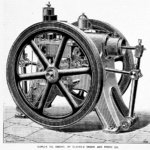 How about this one?. Willsea rotary (rocking) valving engine.
Nathan.

You Guys Rock!! And THANKS!! Chris

It's a little blurry, but here's a video I shot at Mount Pleasant 10 years or so ago of a cut-away Knight Sleeve Valve Engine going through the motions.

Chad Johnson said:
This is one of my Willys Knight sleeve valve engines with the head off.
2 sleeves that move up and down on connecting rods connected to a separate 2 throw crankshaft that is geared to the main crank.
The head is shaped like the piston and has rings, 1 of which is 1 inch wide!
Not like anything else I've ever seen.

Good Afternoon,Tom Jackson here,I have a question on your Willys Light Plant.Does this engine have a head gasket of any kind or does it use the wide ring in the head to seal the head?Also can you tell me how to set the sleeve to piston timing?I have one of these engines that I bought at Denton N.C. many years ago from a friend of mine that he took it apart to see how it worked and said he did not know how to put it back together.There are no timing marks on the crank or sleeve crankshaft.Any help would be welcomed Tom Jackson......
J

Someone get this thread back on the rails, please.

Throttle governed Lambert with Rites governor. One of 2 known.

The earliest engines had holes drilled in the top of the enclosed crankcase so that when the piston moved to BDC it forced air up thru the cooling fins.

Sometime before engine 382 (pic 1) they switched to a square cradle installed under the cylinder. (Pic 2)

There are approximately 10 of these engines left in existence.

Removable hopper Field Brundage engine. I have seen 3 of these engines in my life, there is allegedly a 4th that I've never been able to verify.
Two of the ones I know of are 4hp, this one is marked 4-6 hp.

I guess any list like this should really include the Mery Explosive engine. A double acting gas engine built in that era would certainly be unique!

Interesting thread & I always liked the Rumsey-Williams with the integral cart frame.


My dad’s Bates & Edmonds engine is pretty unique; see pics 1&2. The big muffler under it is original. Woody S. also has a really unusual version of a B&E that is unique.

My dad’s Stickney engine is also different, see pics below; it has to have that wood block in between the engine frame & base for clearance. For ignition it’s unique because it just cuts the ignition out (without locking the exhaust) but when it coasts/cycles without ignition it pulls a full intake charge & then exhausts the unburned air & gas. Simple but not efficient.

I’ve posted this one on here before but the 1895 Tiffany engine is also kind of unique in a time when most engines were fairly complicated. Tiffany basically patented Simplicity (minimal parts for a 4-cylinder engine).

An engine I’ve liked since a kid is the Tuttle engine with its Huge whole-head exhaust & flame ignition valves. The engine is direct injected liquid-fueled with rotary air intake valves which was really unusual for the late 1860’s. It was also extremely lightweight at the time for its displacement.

Not antiques yet but I have some really unique cycle test engines. The good ones I haven’t shown yet but this Type B version is one I’ve had around. It was originally built to show discrepancies in engine "stroke" & "cycle" definitions, (i.e. it shows how bad some of these definitions are). One of the things it can do is run as a 2 & 4 stroke engine at the same time which is kind of unique. See pics below.

Here’s a link to the engine running on youtube;

A unique engine I made drawings for but never built shows a way vary the cylinder volume of an engine independently from its pistons displacement. (Its cylinder volume can change without any piston displacement in any way). This engine is unique too because its ideal cycles ties the Carnot engine’s efficiency while sticking to all the rules that Carnot set to protect his cycle. (Both engines show the same max ideal efficiency for the same pressure, temperature ranges).

“To be considered the engine has to have at least one remaining example and have features that would have made it unique even when new.”
Click to expand...

My dad & I have some Holm flame ignition double-expansion non-compression atmospheric engines here that were unique when new in that they were made later in the game (1906-1911) when more practical engines were the standard; Holm still was messing around with crude/early cycles. He even stated one of the flame ignition atmospheric engines as being for an airplane which was unusual.

A few unique engines I’d like to find; the 1895 AVM opposed piston sliding yoke engine made in Bucyrus (10 miles from here), & a Hovey. Also a line drawing for a 4-cylinder 8-piston opposed Grant engine.

This pic below is a 2-cylinder 4-piston opposed that was made in the 1920's my dad is working on. It was designed for a car or airplane/autogyro. The main casting to it is unique & some of the parts are fairly crude.