Staff member
Took 124 road north off 160 to Mayday and on into LaPlata Canyon. The road branched right to Columbus Basin and left to Kennebec Pass. We took the right turn and went on up to the mine at the top where we were rewarded with a find. A Fairbanks Morse boiler, a dual in-line cylinder steam engine and a twin cylinder draw works with the cable still extending into the pit. The pit was mostly filled with rock rubble so the fall would be a short one. There was another working mine at the end of the road or at least there were trucks there and a gate was in place.

These places are at the top of the world and you have to 4WD up a long rocky road to get to them. We went down to the junction and back up to Kennebec pass. The Colorado trail passed alongside the jeep trail for a bit and we went up to the notch in the mountain top. You could go on down the other side except that the road was all washed out to the east. We could see Durango far off in the distance. On the way back down there was a large twin boiler along the road, but the engines were long gone.

Even on the ones in the photo, the connecting rods were long gone and anything else that would budge including a main bearing. Nowdays, the B.L.M. frowns deeply on the removal of historical artifacts.

We have had other encounters in our high mountain travels and will have to write them up one day... 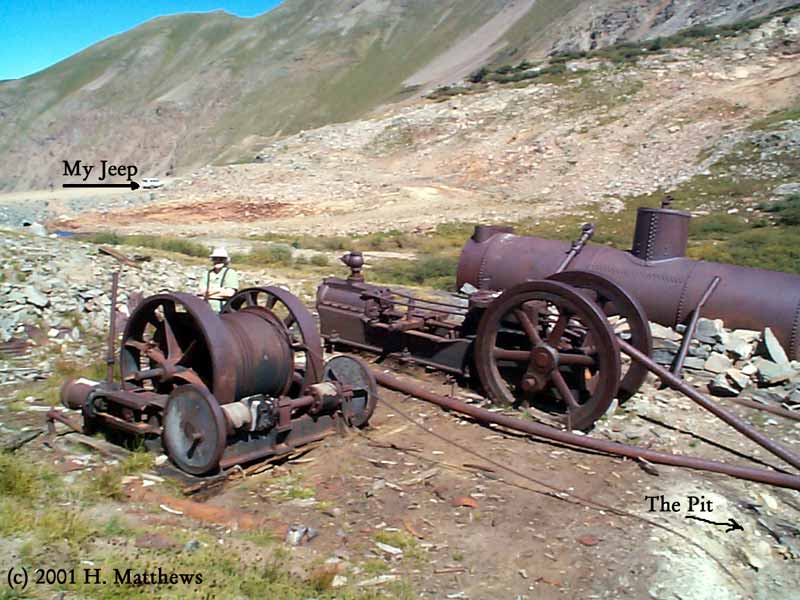 Very interesting, Harry. Please post more when you have time. And while I'm at it, thanks for a great website!

This one's a LEYNER out of Denver. It has three in-line cylinders, two high pressure (one at the flywheel end of the cross head) and one low pressure. The valving mechanisms at the flywheel end are a marvel to analyze. This is a really LONG engine and I have several photos from different angles. It could be that this is a compressor engine and that would explain the three cylinders and the lack of a pulley. Air is used in a big way in mining, for drilling and to operate much of the heavy equipment. We ran onto this one at a mine having just crossed Cinnamon pass on the Alpine Loop. 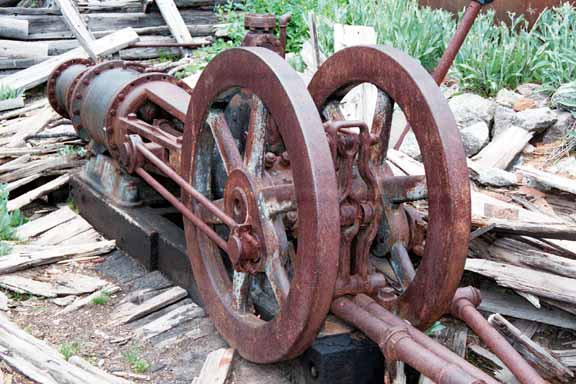 The view from on top of the world as we started down from Engineer Pass on the Alpine Loop. Yes, that's snow and yes, that IS the road down below. 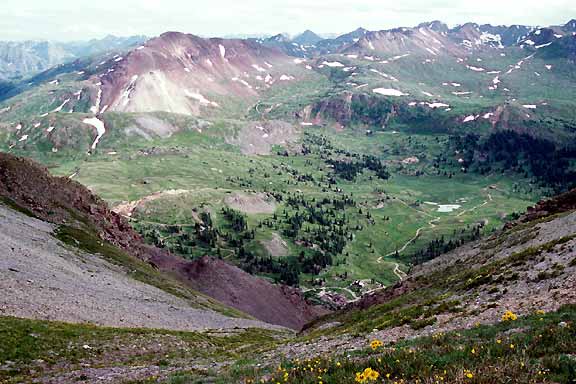 Harry: Nice views of some of the OLD engines, places and equipment most of us never see. I'm getting dizzy looking at the road down to the real world. The other views of the mountains are great. "THANKS" for sharing

Per our recent thread on the New GEM, this would be a great article, and tell em to use COLOR pictures! This is the stuff most of us engine folks only ever dream about seeing - old engines in their original places. Even if there are pieces missing, it's great to see what they were and where the are! This kind of stuff fascinates me!!!!