Is anyone keeping a Serial #'s list for THE INDEPENDENT HARVESTER Engines? I have had a few fellows asking about a #'s list. I have some Info on the Company and have had Decals repo'd for the Type C 1 3/4 HP engine but I haven't kept a serial #'s list. Just wondering if a list is out there somewhere.
R

I have talked to you a couple times about starting a list. I was actually going to start a thread like this a few days ago. Thanks for getting me into action. I did talk to Joe C. in Kentucky about them a year or 2 ago. He says he has a list of 40, but I never did get it from him. I will have to call him back again.

I have 21 on my list that I have just gotten from looking at pictures on the web and smokstak and a couple from shows. 5 are side shafts and the rest are the Type C.

I talked to Ray Forrer of the Sandwich Registry to get some advice. He thinks I should go for it. I talked to Steve Barr and he could probably be coerced

into creating a page on the Sandwich Early Day Engine Club website like Ray has for the Sandwich Engines. I think this would make sense because Plano and Sandwich are down the road from each other. So.....unless anybody out in cyber engine land has any objections, I'll take up this task. :shrug:

Some information that would be great is of course the serial number, the type (C or SS), HP, the lettering style, running or not, original cart, pictures, and the owner's contact information. Of course I will not post any of the owner's information except the state/country that the engine lives in.

The lettering style on the Type C engines is particularly interesting. From looking at pictures of original engines I have narrowed the switch from script to block lettering from the last known script engine to be 2123 and the first known block lettering to be 3191. Script engines are all listed early.

The Sandwich Early Day Engine Club is featuring Independent in 2015 if I remember correctly. Let's get those old Independents out to the show!

How many more have been found? Sorry the format will not come through.
Last edited: Mar 26, 2014
D

Thanks Ryan for taking the Ball and running with it. It is time for me to pass on what Info that I have on The Independent Harvester Co. I do have some varied Info on the company that I have gathered over the years. I sold the engine that I had assembled from peices at an Auction I had several years ago. I have the Paint Color and other info about the
Type C 1 3/4 H P.
Ryan, that is a good Idea about putting the list on the Sandwich site since they were made in the same local area. The more places we put the Info, the more people will see it.
C

I have # 555 a 2 HP sideshaft. It currently resides in Palominas, Arizona.
R

The oldest one yet!
B

Hard to believe I restored that almost 20 years ago now. Man I used to be skinny!

Thanks for the list of engines / serial #s!
E

Thanks for our first engine outside of the U.S.

I love the story on your engine. I'm jealous that you got to do that with your grandfather. Mine died when I was almost 4. I never did work on an engine with him, but he did infect me with the bug! He always wanted an Independent. Now there's 2 here. I bet he's proud.

Does it have "THE FARMER'S CO." just on the tag or is it elsewhere on the engine?
R

The first picture of the side-shaft (Rockford) is on a 1915 advertising calendar that was recently on ebay.

The last 2 Dale got from the Kendall County Historical Society in 1991.

GW Eddy, That is nice of you to offer the Head with the mixer. That just might get another engine running. I bet there isn't many of those laying around. The one that I had was a basket case when I got it, Model T Carb for a mixer, No Piston and Rod, no Crank Guard, & no Gov. Guard, no Mag or Igniter but I finally got it complete and sold it at my Auction 5 yrs. ago.

Here is a Tip that I discovered on the Gov. guard. The guard is held on the engine with a Round Head 1/4" stove bolt. Due to the Taper on the mounting leg, take a spot facer machine tool and spot face the area around the bolt hole so the lock washer is parallel to the back of the mounting leg.
I think that was a problem and is probably the reason you see so many Independent's with the Gov. Guard missing. The lock washer wouldn't keep the bolt tight, so the Guard would get loose and flop around.
G

Here is a 1911 ad depicting an "INDEPENDENT" SS engine. 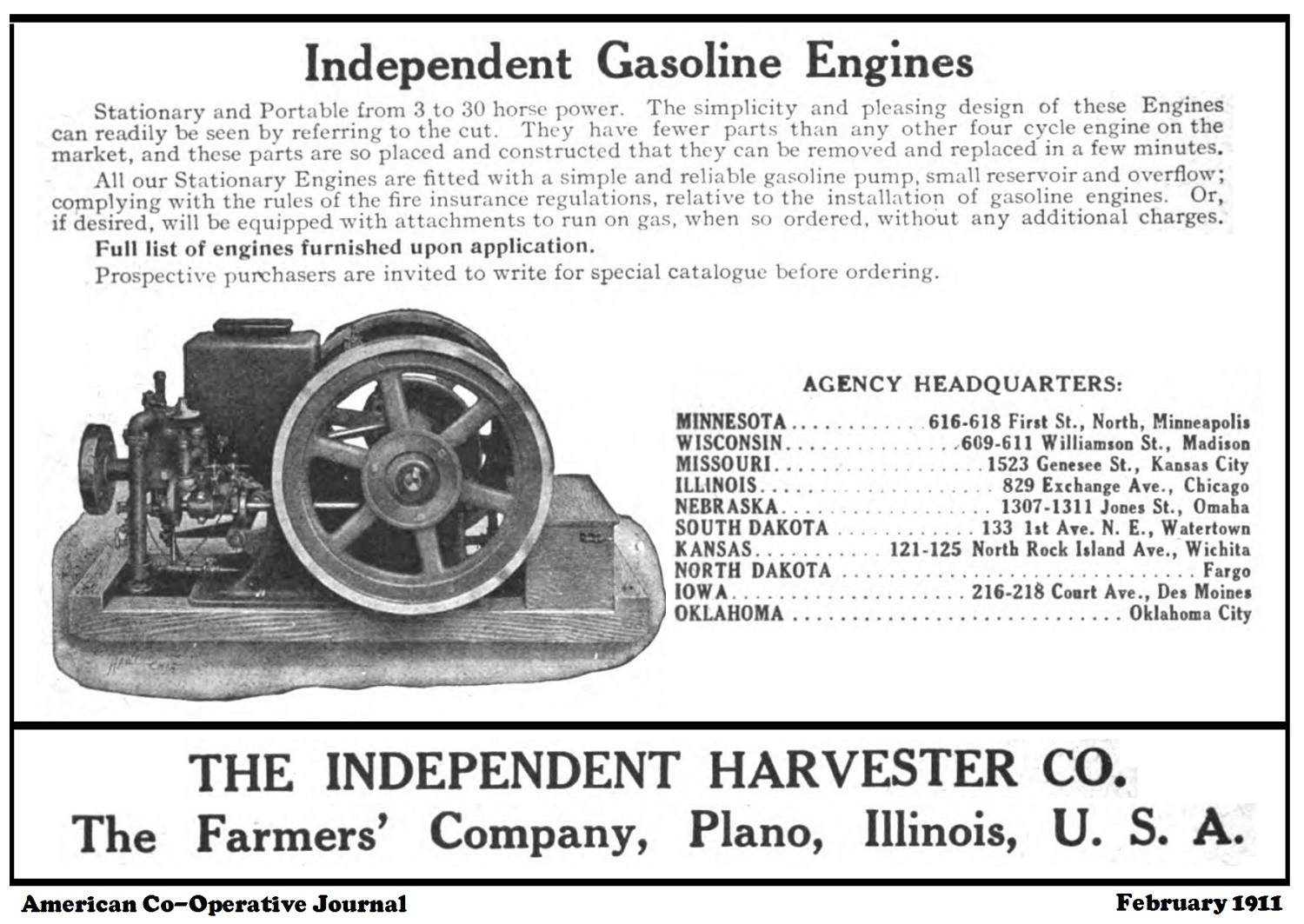 Denis Rouleau said:
Who built them?
Click to expand...

Denis, I'm not sure of who built them. I have a theory that they were a re-badged Rockford as they sure share a lot of similarities. I restored a 4hp back in 1975 when I was just out of high school. My dad and brother restored another 4hp a number of years later. Both were sideshaft and both came from the same area of Minnesota about 70 miles south of where we live. The Rockford question has always been in my mind. If it is true I would like to include them as part of the E-B feature at Rollag this fall.

Here's a little more evidence of the Rockford/Independent connection from the American Machinist Magazine, July 21, 1910....
Charles

Also found this from Gas Power Magazine, Nov. 1912 - turns out Cormack wasn't just Rockford's engine designer, he was also one of the company founders! Wonder if he "retired" because the other board members wanted to sell out to E-B.....
Charles


Dale Russell said:
Thanks Ryan for taking the Ball and running with it. It is time for me to pass on what Info that I have on The Independent Harvester Co. I do have some varied Info on the company that I have gathered over the years. I sold the engine that I had assembled from peices at an Auction I had several years ago. I have the Paint Color and other info about the
Type C 1 3/4 H P.
Ryan, that is a good Idea about putting the list on the Sandwich site since they were made in the same local area. The more places we put the Info, the more people will see it.
Click to expand...

I have a 1 3/4 Independent. Can you tell me the paint code for my engine?

Rudy, FYI & others. This Info refers to the Paint Colors & the "Decal's" used on "THE INDEPENDENT", TYPE C 1 3/4 HP Engine. The Early Type C engines had a Decal "THE INDEPENDENT" in block letters similar to these on both sides of the water hopper & the engines were painted a Med, Blue that was close to Dupont Dulux 52050. (Dupont Dulux is getting hard to find).

The later Engines, & I haven't found any info as to when they made this change, used a pair of Decals like before except the lettering was in Script placed diagonally on the sides of the hopper. These Engines were painted a Dark Blue close to PPG 18446. The O.D. of the Flywheels & the sides of the Flywheels were left unpainted & polished bare metal. The Skids were painted Red. I have dimensions of the Skids if anyone needs them, from an original engine on an original Cart, Front Wheels were 7" X 1 3/4" (Casting # Z-29), Rear Wheels were 10" X 1 3/4" (Casting # Z-28).

I have had both styles of Decals reproduced in case anyone needs them. "THE INDEPENDENT" Company was a "CO-OP" and had a full line of Farm Equipment for the Farmer's of that day, Most all of it horse drawn of course. Just trying to give back to the Hobby. If you have Questions, just ask!
Last edited: Jan 19, 2019
You must log in or register to reply here.
Share:
Facebook Twitter Reddit Pinterest Tumblr WhatsApp Email Link
Top